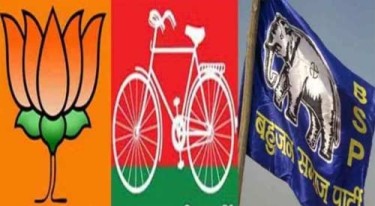 Linus tackles things head-on. He takes sides in his analysis and it fits excellently with our editorial policy. No 'maybe's' and 'allegedly' for him, only things in black and white. View all posts by this Author
How has UP voted? The exit polls are not sure. Either the samples have been improperly drawn or the regions have not been equally represented or the interpolations of the statistics are not consistent. But whatever the reason, the wide variations in the results of different pollsters have thrown an element of surprise regarding the final results.

The ABP News-AC Nielsen poll shows that the NDA will get only 22 seats while the mahagathbandhan of SP-BSP-RLD (MGB) will get 56 seats. At the other end of the scale, the Times Now-VMR poll shows that the NDA will get 58 while the MGB will get only 20. In between, the CVoter poll puts the figures at 38 for NDA and 40 for MGB. This has utterly confused the public and put the methodology used by the pollsters into question.

While exit polls sometimes get it horrendously wrong (like they did in Australia recently), if the trend is same for all polls, one can assume that given a difference of +/- 5%, the results would be close to the polls. But in case of UP, the exit polls have put out widely different figures that do not allow one to form a firm opinion.

The MGB and the Congress have said that people are in for a surprise on the 23rd of May. They have sought to base their opinion on the assumption that they have spotted silent voters in the state who do not speak much but are disgusted with the policies of NDA and will vote against it. They say that the BJP will be wiped out in the state.

The BJP, on the other hand, is quite upbeat that it will better its 2014 tally. The party thinks that PM Modis image and the events subsequent to the Balakot strikes have raised the partys image among the voters and they are ready to forget the excesses of Yogi Adityanath to give Modi another chance. The party also seriously thinks that the SP votes have not been fully transferred to the BSP candidates in the constituencies where they got the ticket.

Whatever be the results, one thing is sure. Amit Shahs and Yogis boast of bettering the 2014 tally is not going to happen. The BJP is set to lose quite a few seats to the caste combination cobbled up by the MGB. It is also certain that these losses would have multiplied if the Congress had refrained from fielding candidates in all the 80 constituencies of the state.