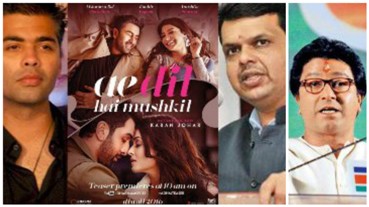 Editor-in-Chief of indiacommentary.com. Current Affairs analyst and political commentator. Writes for a number of publications. View all posts by this Author
Ae Dil Hai Mushkil (ADHM) will release on 28th October as planned after all. A deal was brokered between Raj Thakeray and the producers of the film, including Karan Johar, by Maharashtra CM Devendra Fadnavis where the producers agreed to pay Rs 5 crore to Army Welfare Fund, show a clip eulogizing Uri martyrs before the film starts and give an undertaking that they will never again work with Pakistani artistes. With this, a sordid chapter involving political blackmail came to an end.

Make no mistake, even though Raj Thakeray and his political outfit Maharashtra Navnirman Sena (MNS) have little electoral presence (it got just 0.8 percent of votes in state elections), their mischief making potential is the strongest. They can mobilize thousands of weapon wielding cadre and destroy property, burn cinema halls and cause other public disturbance to bring the city of Mumbai and even large parts of Maharashtra to a standstill for as long as they wish. Ideally, it is the elected government of the state that is supposed to give protection to cinema halls screening the film for it has been passed by the Censors, the actors working were here on government sanctioned visa and the makers of the film had not broken any laws. But that is easy to say than do. Even if the government were to deploy massive police force to prevent the miscreants from causing disturbance, cine-goers would have still stayed away fearing riots.

That brings us to the second point. Were the producers of the film right in striking a deal with Thackeray? Their predicament was manifold. Film release dates are decided much in advance. Care is taken to avoid clashes between two big budget films. ADHM was as it is clashing with Ajay Devgans Shivay. If it was not released on 28th October, there was no certainty when it would have got the next release date. That would have indefinitely blocked huge funds on which interest has to be paid. The producers must have thought Rs 5 crore was a small sum compared to the losses they might suffer if the release was put off indefinitely. Their response was dictated purely by commercial considerations.

But the role of Devendra Fadnavis is something that needs to be closely examined. Instead of brokering a deal that smacks of blackmail, he could have politely, or even firmly, asked Thackeray to give up his protest as Karan Johar had already circulated a video (which some called groveling) in which he had apologized for casting Pakistani actors. He could have warned Thackeray that causing disturbance over the film on the streets would be firmly tackled by the government. He should not have bowed to this gross political blackmail. But since the Shiv Sena is increasingly critical of both the BJP and Fadnavis, the CM might have wanted to win an ally in MNS by giving him this leeway. In any case, what Fadnavis has done is set a bad precedent where anyone with a few goons will now hold the state to ransom and ask it to broker deals.

The Army, as usual, has come out with flying colours in this unsavoury episode. Immediately after the news of Rs 5 crore being extorted in its name came out in the press, Army Welfare Fund spokespersons made it known that the Army was not interested in such tainted funds. They said that all contributions to the said fund were purely voluntary and coercion was unethical and unwarranted. What will MNS do now? Will they collect the Rs 5 crore and distribute it among the families of Uri martyrs? Really, this is going too far and the Centre must do something about it. If anything is wrong, it should be banned as per law. But how can it become right by paying Rs 5 crore and why is this saffron collar extortion being allowed?