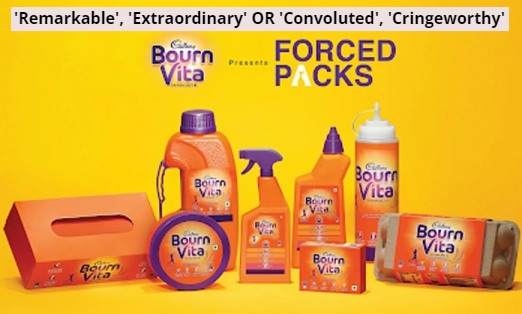 'Faith Not Force' By Bournvita

'Faith Not Force' By Bournvita

People are talking about the Bournvita forced packs ad. The jury is still out whether it was a gimmick to keep the brand trending or whether it was a social awareness message using a novel method. While most people think that Bournvita has tried to make parents wonder if they are doing the right thing by forcing children down the path they choose for them, others think that the method used is not correct and finding Bournvita packed in, for example, toilet cleaner bottles is repulsive.

Yet, say people, that the very idea was to use this repulsion to show that forcing children to do something they do not like or are not mentally inclined to do is also repulsive. People say that Bournvita has always tried to push the envelope, like in the Taiyyari Jeet Ki series of ads, to show that it is mind which needs to be set first and the body (by drinking Bournvita, of course) will follow.

In the recent #faithnotforce series of ads, Bournvita has packed the drink in such diverse avatars as an egg case, a soap box, a toilet cleaner, a ketchup bottle, cooking oil pack and the like or something that one would never associate with the brand. The idea is to cause surprise, shock, and repulsion. As the surprised lady in the video asks the guy at the store, "yeh Bournvita ka toilet cleaner?"

The association with forcing a child who wants to be a cricketer to become software engineer - and hence forced packaging - is hard to miss. But some people also think that Bournvita is trying to preach to parents and it might backfire. Some also think that it is 'cringeworthy'. But most people agree that there is 'forced packaging' when it comes to 'deciding' a career for children and the brand has done well to highlight the issue and make parents think about it.