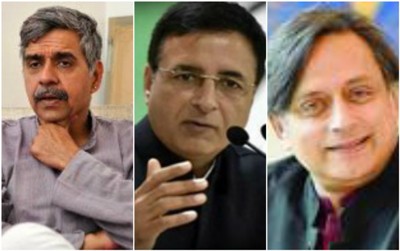 For The Congress, Sane Advice Is Gyaan

For The Congress, Sane Advice Is Gyaan

What Sandeep Dikshit has said in an interview to The Indian Express, which has been seconded by Shashi Tharoor, is absolutely true. But the Congress and its spokesmen are acting as if nothing is wrong with the party and are accusing Dikshit of ignoring his responsibilities and duties vis-a-vis Delhi and blaming the party leadership for the rout in the recent elections.

Dikhshit told The Indian Express that it was sad that the Congress has not been able to find a party president and the ailing Sonia Gandhi has to look after the affairs as the interim president. Dikshit said that there are "at least six-eight" leaders who can lead the party. "I'm actually feeling rather dismayed by our senior leaders. They must come up. Most of them, those who are in Rajya Sabha, those who have been former Chief Ministers, even some of our current CMs who are very senior, I think it is time for them to come up and go the extra mile for their party. There is Amarinder Singh, Ashok Gehlot, Kamal Nath...why don't they get together, get other people around? There is (A K) Antony, (P) Chidambaram, Salman (Khurshid), (Ahmed) Patel....all of them have done great for the Congress. They are in the evening of their politics, they probably have another four or five years to go. I think this is a time for them to intellectually contribute....they can go into the process of leadership selection, either at the centre or in states or elsewhere," Dikhsit said. He attacked these leaders by saying that "sometimes you want inaction because you don't want a certain action to happen".

Shashi Tharoor immediately seconded what Dikshit said in the interview. Tharoor tweeted "what Sandeep Dikshit said openly is what dozens of party leaders from across the country are saying privately, including many with responsible positions in the party. I renew my appeal to the CWC (Congress Working Committee) to hold leadership elections to energise workers and inspire voters."

But the Congress took Dikshit's comments on the chin. Party spokesman Rajdeep Surjawala said that "If Sandeep is putting it on twitter, if he puts even a fraction in his work, he will transform Delhi. Instead of giving gyaan (lecture), concentrate on doing good work." This attitude is not going to revive the Congress. What Dikshit has had the guts to say and what other leaders like Jairam Ramesh, Jytoiraditya Scindia, Manish Tiwari, Deepender Hooda and other young leaders have been pointing out must be done. There has to be a party president to give direction to the younger leaders and the party must reinvent itself. Rahul Gandhi failed big time in 2019 with his Rafale antics and the party got no traction on its position on the abrogation of Article 370. It has not been able to rally the opposition around it, let alone thinking of leading an opposition alliance. The Delhi rout (the party candidates lost their deposits in 63 constituencies) is a renewed wakeup call (the party had not got the message in the 2019 elections). If the top leaders of the party do not wake up from their slumber now it will be too late in another couple of years.