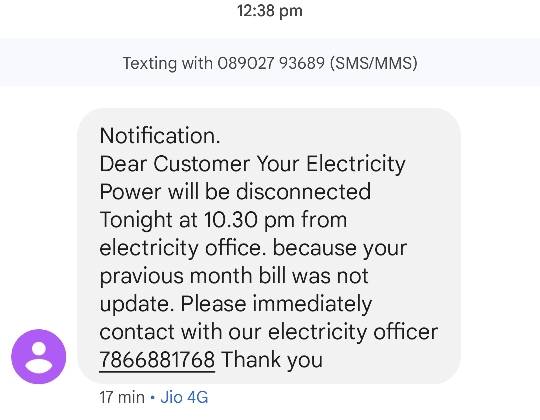 A new fraud is being circulated through text messaging. In this, some people are receiving text messages which say that their electricity lines will be disconnected by 10pm on the day the message is received for non-payment of dues. The text message provides a number where one can call the 'electricity officer' for redressal. India Commentary tried to call the number given in the message but it was constantly busy and a text message was received saying that the person was busy and would call later. But there was no call back from the given number.

We searched for the numbers on Truecaller and came up with the response that 89027 93689, the number from which the text message was sent, is "Cesc Big Fraud" and the number 7866881768 of the electricity officer that the text message wanted one to call was "Electric Power House" and the email given was rahulsharmaoffice@gmail.com. The screen shots are provided for your benefit.

Since despite several attempts we have not been able to talk to the person whose number was given, we cannot advise our readers about the exact nature of the fraud but be warned - this is another big fraud in the making. Kindly do not fall for it.

Whenever one receives such messages, it is always prudent to first verify the text for correct English. No concern will use "pravoius" for previous and send such a poorly-drafted message. Then, the customer's consumer number and name along with the period for which payment is due and the amount, will always be a part of the message. Look for these dead giveaways for such fraudulent text messages.