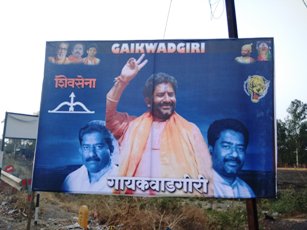 Gaikwadgiri is the 'Official' Term for Neta Misbehaviour

Gaikwadgiri is the 'Official' Term for Neta Misbehaviour

Editor-in-Chief of indiacommentary.com. Current Affairs analyst and political commentator. Writes for a number of publications. View all posts by this Author
First, a MP of a militant Hindutva political outfit now leaning towards a regionalist niche does an unpardonable thing in public by abusing and manhandling an airline staffer on flight. The airlines (and all other airlines) ban him from flying. Then fellow MPs, instead of taking him to task, keep mum as his party leaders defend him in parliament. Finally, a government without backbone and dependant on that partys support in Maharashtra, allows him to go unpunished and forces the airlines to revoke the flying ban.

Instead of being repentant, the MP, his party leaders and the Shiv Sainiks are treating this as a victory. They have even given a name to the repulsive act of Ravindra Gaikwad. Abusing and manhandling public employees is now officially called Gaikwadgiri in Shiv Sena parlance. Worse, they have put up huge hoardings declaring this. Instead of being shamed, Gaikwad is being treated as a hero. Where does that leave the airline employees, who will now be on edge every time Gaikwad is on board? Or other employees in places Gaikwad visits? And what does it say about our society and moral values?

Employees of Air India had already said that they would not feel comfortable flying Gaikwad. Obviously, anyone would be after what the MP did. The worst thing is that he apologized only after showing a lot of defiance and on being forced to do so. But the government chose to ignore their pleas. At the very least, the government should have allowed Air India to lodge a complaint under the relevant criminal act for the MPs act of not deplaning when being asked to and assaulting a public servant on duty. That would have assured the employees as well as the general public that there would be a line which MPs with inflated egos and a false sense of self-importance would not be allowed to cross. Deplorable VIP culture and political blackmail will get a fillip (already TMC MP Dola Sen delayed a flight for 40 minutes as seating arrangements were not to her liking) by this act of letting Gaikwad get away with Gaikwadgiri.