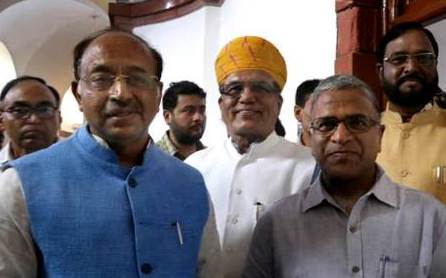 Rajya Sabha: BJP Outfoxes The Congress - And The Opposition

Rajya Sabha: BJP Outfoxes The Congress - And The Opposition

Editor-in-Chief of indiacommentary.com. Current Affairs analyst and political commentator. Writes for a number of publications. View all posts by this Author
The way the NDA government managed to get its nominee Harivansh elected to the deputy chairmans post in the Lok Sabha once again shows that when push comes to shove, the skills and speed of crisis managers in the BJP are much better and despite growing bonhomie, the opposition is still in disarray. Rahul Gandhi made a series of mistakes in this episode and it was surprising because he has shown a proactive demeanor of late and has been able to discomfort the ruling dispensation on more than one occasion in the recent past.

The first, and the biggest mistake, was to nominate its own man for the post. Given the fact that the BJP had fielded an MP of ally JD(U), the Congress should have been tactical and magnanimous enough to consult other opposition parties and field a consensus candidate. That would have rallied the entire opposition around him or her. The BJP, on its part, made a brilliant tactical move which blunted the criticism that it was ignoring allies. With this one move, it has ensured that the JD(U) remains in the fold(especially after a series of reports that indicated that Nitish might be in talks with the Congress and other opposition leaders to do what he is best at  jumping the ship) and that other disgruntled allies like the Shiv Sena, the Akalis and Ram Vilas Paswan are given hope of better treatment. The immediate result of this move was that the Shiv Sena and the Akalis voted for Harivansh instead of abstaining.

Then, after nominating a Congress candidate, the second big mistake Rahul Gandhi made was not to reach out to several opposition leaders like Arvind Kejriwal, Naveen Patnaik and Jagan Reddy to ensure that their MPs voted for him. AAP was so miffed that Rahul didnt call that they tweeted about it, quipping that politics cannot be run on egos and abstained, while Jagan Reddys YSR Congress also abstained, calling it a contest between the devil and the deep sea. Naveen Patnaik was won over by the BJP as Modi himself called him to ask for support.

At this rate, the opposition will not be able to get the requisite numbers before the 2019 elections. Already, KCR of TRS and Naveen Patnaik have been won over by the BJP. There is a chance that despite calling the BJP the devil, YSR Congress will also lean towards it now that Chandrababu Naidu has made an exit from the NDA. The BJP has managed to assuage the feelings of its disgruntled allies and has won over two new possible allies. The Congress on the other hand, by being selfish and not being proactive, has allowed opposition ranks to be breached. This doesnt augur well for opposition unity ahead of the general elections.