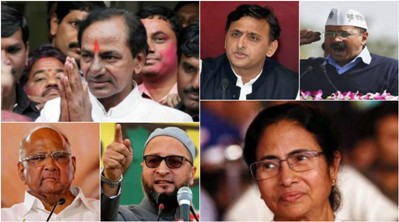 Is It A Good Idea to Have a Regional-Parties-Only Third Front?

Is It A Good Idea to Have a Regional-Parties-Only Third Front?

Editor-in-Chief of indiacommentary.com. Current Affairs analyst and political commentator. Writes for a number of publications. View all posts by this Author
A non-Congress third front?
The chief minister of Telengana and leader of the Telengana Rashtra Samiti (TRS), K Chandrasekhar Rao (KCR) has called for a non-BJP, non-Congress Third Front to bring about a qualitative change in national politics. Although he did not actually say that the Congress would not be part of this third front, he left nothing to imagination. KCR said that there is a serious need to bring change in national politics. Seventy years have passed since Independence and out of those 70 years, 64 years were ruled by either BJP or Congress. Even after 70 years, people are suffering and they dont even have water to drink. It was immediately clear from his statement that he did not see a role for the Congress in his proposed third front.

Support from regional satraps
Since what KCR said was of import for the regional parties, support started pouring in. One of the first to second his thoughts was Asaduddin Owaisi of the AIMIM. Owaisi said that though his party initially opposed him, they now agree with him and have faith in his political sagacity to bring together all regional parties to play a crucial role in the formation of the next government at the Centre. Bengal chief minister Mamata Banerjee was even more supportive. She called KCR and pledged full support. On his part, TCR has begun sounding out the likes of the DMK, the Samajvadi Party and even the estranged BJP ally, the Shiv Sena.

How will the front get 272 in Lok Sabha?
There is no doubt that there is lot of sense in regional parties fighting the national biggies in their own backyards, getting enough numbers and then coming together to make a bid at the Centre. Their strength lies in their own states. They can convince people to vote against both the BJP and the Congress by highlighting that these national parties do not have the interests of the state in their list of priorities. But does past record of voting pattern suggest that people would do their bidding? Sadly, it doesnt. Apart from the Trinamool Congress in Bengal (and the Left parties before them) and AIADMK or DMK in Tamil Nadu, no other regional party has ever managed to have a decent presence in the Lok Sabha. Telengana itself has just maximum of 17 MPs and TRS is not even sure to win all seats. Then how will these regional parties get the numbers? 272 MPs in the Lok Sabha is not a joke.

Who will lead the front?
Further, the question of leading the third front will be very tricky. Ever since KCR made the statement, the TRS party office in Hyderabad is reverberating with slogans like Desh Ka Neta, KCR. This, obviously, will not be sweet music to the ears of Mamata Banerjee. Or for that matter to the ears of Mulayam Singh Yadav and Sharad Pawar. They are all experienced and senior politicians who nurse a desire to occupy the top position. They are unlikely to yield that place to KCR. If the TDP also throws its hat in the ring, Chandrababu Naidu will become one more aspirant. Then there is Arvind Kejriwal who thinks Modi has usurped the chair that is meant for him. The list is endless. It will be extremely difficult to pick a leader when such huge egos will clash.

What about the common minimum programme?
Then there is the question of deciding on a common minimum programme. Both KCR and Naidu are pragmatic politicians given to policies which, if they are not outright rightist are not leftist also. How will they reconcile the same with the more left than the leftists views of Mamata Banerjee? KCR and Naidu are both known to have radical views on land acquisition, with Naidu advocating land pooling for the new capital of Andhra Pradesh. Their views will not find favor with Banerjee. On other fronts too, regional leaders have myopic views that do not extend beyond their own states. Each one will flog a different horse and take a separate lane.

Ignoring the Congress will divide opposition votes
But one thing is clear from this development. The Congress has no place in the scheme of things of regional satraps. From 2013 till date, Narendra Modi was enemy number one for many of them. But with the Congress losing both states and vote share and Rahul Gandhi not inspiring confidence, regional parties think that charting a path that keeps them away from both is best. But they are overlooking one fact. If BJP is the party to beat, then the opposition vote has to be united. In most states in India, the Congress still has the infrastructure and the worker base to retain a loyal vote bank. It might be dwindling, but when push comes to shove, the Congress vote share, if not united with the regional parties, might divide the opposition vote and work in favour of the BJP in many places. KCR would do well to research this electoral math before raising his aspirations.