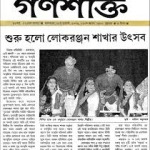 Editor-in-Chief of indiacommentary.com. Current Affairs analyst and political commentator. Writes for a number of publications. View all posts by this Author
In 2013, the West Bengal government had discontinued issuing government advertisements to Ganashakti. It had issued an order in this regard, claiming that since Ganashakti was an organ of a political party and that it had not clearly specified the rates, it was ineligible for receiving government advertisements. Aggrieved by this, Ganaskahti filed a writ in the Calcutta High Court.

The Court ruled that discontinuing advertisements to Ganashakti would amount to infringing upon the freedom of the press. It cited Sakal Papers (P) Ltd v Union of India & Ors and Bennet Coleman Co v Union of India & Ors where it was clearly established that curtailing advertisements to any newspaper amounts to increasing its costs and thereby scuttling its circulation. It also cited Ushodaya Publication Pvt. Ltd v Government of Andhra Pradesh & ors, where a full bench of the Court Ã¢â¬Åobserved that though the expression "freedom of press" does not occur in Article 19(1)(a), freedom of press is a part of the right of free speech and expression and is covered by Article 19(1)(a). It has also observed that the freedom of circulation of a newspaper is necessarily involved in freedom of speech and expression and hence enjoys the protection of Article 19(1)(a).

Then the Court categorically said that ownership of newspaper is not a criterion to deny advertisements by State. It also said that the State had no discretion in this regard and had to follow DAVP guidelines. It cited Sushil Choudhary & Anr v State of Tripura and ors where it was held that Ã¢â¬Åa policy of the Government to allot 24% out the total 30% of advertisement to one daily and the remaining 6% to other dailies belonging to the same class to be violative of Articles 19(1)(a) and Article 14 of the Constitution of India.Ã¢â¬Â

The CourtÃ¢â¬â ¢s decision will ensure that the government of the day does not play politics with something for which detailed guidelines exist. It is a matter of fact that Ganashakti is empanelled with DAVP and continues to receive advertisements from Central and other state governments. DAVP guidelines clearly mention that Ã¢â¬Åthat in releasing advertisements it does not take into account the political affiliations or editorial policies of newspapers/journals.Ã¢â¬Â The West Bengal government order was a blatant case of political bias and the Court has done well to set it aside.