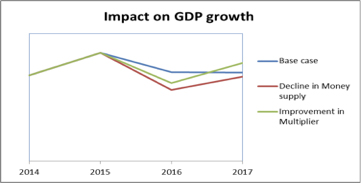 Editor-in-Chief of indiacommentary.com. Current Affairs analyst and political commentator. Writes for a number of publications. View all posts by this Author
The GDP data for the Oct-Dec 2016 quarter is out. No sooner did the government declare the data that a section of the media started rubbishing it as dressed. It was as if the knives were being sharpened for long in anticipation of the announcement. Normally, quarterly declaration of GDP data is a tepid event that attracts attention of the business papers. But this quarter was different. Everyone was waiting to see what demonetization  the biggest economic disruption in Indian history  had done to the economy. The Left liberals were dead sure that their predictions of a slowdown (as an effect of demonetization, considered by them to be a monumental blunder) anywhere between 2 to 4% of the GDP would come true. They had already planned to write big pieces consigning Modi and his economic policies to the dustbin. But when the figures came out, they were stunned.

Apart from a small drop in GDP, the economy was cantering well, although it was not galloping. Immediately, the chorus went up that the government had indulged in window dressing to paint a rosy picture. The reality, they said, was different. But is that the case? If it is so, then why dont the Left-leaning economists come out with an alternate set of data that provides the true picture? The answer is simple  the government is speaking the truth. The economic data is collected from various sources and collated before being put out for public consumption. The core data is untouched. It is the presentation that is played with. Every government presents the data in a manner that shows that its economic policies are succeeding. There is nothing wrong in that. If core data is fudged, then the government stands accused of fraud. But that is not the case with the Oct-Dec 2016 quarter core data.

Apart from sectoral churn and inflated tax collections due to people wanting to show bigger incomes to deposit demonetized money, there is nothing much in the data. No part of the data is so out of place that it can be called fudged. The farm sector has done better than expected due to good monsoons. So, instead of contracting the GDP, it has added to it. That is one of the reasons why the figures have not gone down. Tax collections were robust as some people paid huge advance tax because they wanted to show huge income this fiscal in order to deposit demonetized currency in bank accounts. That problem will be tackled by the concerned departments. If that was resorted to in a major way, figures in next quarter will be much lower. But in any case, nothing has been dressed and the figures have been put in public domain as they were received from various agencies.

For the critics who argue that GDP data does not include figures from the unorganized sector which was the hardest hit by demonetization, one wants to say just one thing. Please do not confuse yourself. If you are going by GDP figures, please talk about those figures only. Do not talk about what is not included. Further, one of the avowed aims of demonetization was to bring the unorganized sector in the tax net and strengthen the GDP further. The process has started and the results will show in two or three quarters. Restrictions on cash transactions will break the bone of illegal businesses and they will have to go legit and contribute in the form of taxes if they wish to continue using the massive public infrastructure to do business. Implementation of GST will further tighten the noose around those who hide their books from the tax departments. That will give a huge boost to the GDP figures in the years to come.

Critics of demonetization and other economic policies of the Modi government chose the wrong quarter to try and corner the government. The Oct-Dec quarter is usually not to be targeted as it comes just after the festival season, when demand for goods and services is good, as also after the monsoons. Since the monsoons were better than average this year, the farm sector did well too. The actual effects of notebandi, if there are any serious effects, will be visible in the next quarter. Since remonetization did not happen at the desired pace and the government created an atmosphere of fear, businesses were confused. Manufacturing also tapered off. But some part of the negative effects might be offset by the massive infusion of funds in the five states that went to the polls in Feb-March. We have to wait and see how the dice rolls in the last quarter of the 2016-17 fiscal to know whether the pessimists, who predict a 2 to 4% fall in GDP, are right or whether the economy is resilient enough to weather the demonetization storm by just half a percentage point or at worst by one percentage point. The government has said that the economy will grow at 7.1% year to year in 2016-17. That will not be as bad as was made out to be and will keep India as the fastest growing major economy in the world.