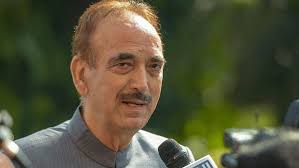 Ghulam Nabi Azad Quits, Says Congress Has Reached A Point Of No Return

Ghulam Nabi Azad Quits, Says Congress Has Reached A Point Of No Return

In one of the severest setbacks to the Congress, senior leader Ghulam Nabi Azad today resigned from all party posts and quit the primary membership of the party. In a stinging letter to interim party president Sonia Gandhi, Azad said that the party has reached a point of no return and is not capable for fighting for the nation. He said that under the circumstances, it was pointless to remain in the party.

Azad has been miffed with the top leadership (read: Gandhi family) of the Congress for the last couple of years and was one of the driving forces of the G-23, the group of (originally) 23 senior leaders who wrote a letter to Sonia Gandhi demanding course correction, internal reforms and organizational elections in the party. They were placated by the high command in various ways, including the Jaipur conclave which the party called Chintan Shivir (but which the BJP derisively termed as Chinta Shivir) where some decisions were taken about holding internal elections and forming various committees to focus on serious issues to take on the BJP-led NDA government.

But it is clear that after the Jaipur conclave, things have not moved in the right direction. A clue that Azad was planning something big was given out just 10 days ago when he declined the party's offer to head the campaign panel in J&K. He resigned from the post just hours after he was appointed by the party.

In his letter to Sonia Gandhi, Azad has said that Rahul Gandhi demolished the consultative mechanism within the party and handed over charge to "inexperienced sycophants" even as senior leaders were completely sidelined.  He has even alleged that at times, Rahul's security guards and personal assistants took important decisions.

Azad departure might open the flood gates and other senior leaders may quit the Congress. That the Gandhi family is not willing to go for reforms within the party as it might reduce their hold over it is clear in the manner they rejected the proposal of poll strategist Prashant Kishore after several presentations. As Azad said in his letter, no elections are held at any level in the party and leaders are made to sign lists appointing handpicked nominees. At this rate, the Congress, already a pitiable shadow of itself, will soon disintegrate. That would be a tragedy as the nation needs a strong opposition.