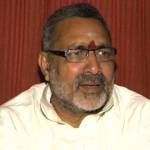 Editor-in-Chief of indiacommentary.com. Current Affairs analyst and political commentator. View all posts by this Author
BJP MP and minister Giriraj Singh has asked whether the Congress would have accepted Rajiv GandhiÃ¢â¬â ¢s wife as its president if she was a Nigerian. It has immediately stirred a huge controversy, with the Nigerian High Commissioner in India asking Singh to apologize to the people of Nigeria and the government warning him to refrain from embarrassing it.

Singh is not famous for being particularly intelligent. He has shot off his mouth previously too, when during the 2014 election campaign, he asked Narendra ModiÃ¢â¬â ¢s critics to go to Pakistan. He had then forgotten that HinduÃ¢â¬â ¢s outnumbered Muslims in ModiÃ¢â¬â ¢s critics and why would they go to Pakistan. He has now forgotten that by alluding to Nigerian women when he meant black women, he has hurt the sensibilities of the people of a friendly nation. Loose cannons like Giriraj need to be mothballed as they go against the inclusive growth agenda Modi has lined up for India.

But the larger question that arises is: are Indians racist? Do they fawn over and consider white skinned people superior? Why do companies selling skin lightening products do roaring business in India? Why are we obsessed with being light skinned or fair?

There is no doubt that Ã¢â¬ËgorasÃ¢â¬â ¢ are looked up upon as much as Ã¢â¬ËkaalasÃ¢â¬â ¢ are looked down upon in India. Has it got to do something with the caste system, where it was believed that the colour of the skin progressed from dark to fair with shurdras having the darkest and Brahmins the fairest skin tone? Is it because shudras were considered untouchables that all dark skinned people are looked down upon?

Actress Nandita Das had written a scathing critique on our obsession with fair skinned actors. She had pinned it down to insecurities among men and women. Read NanditaÃ¢â¬â ¢s full blog here. But the fact remains: Indians are obsessed with fair skinned people and hence wish to be fair themselves too.

Many years ago, I saw a Hindi play Court Martial, performed by Usha GangulyÃ¢â¬â ¢s troupe Rangakarmee, where two fair skinned Punjabi officers belittle a dark skinned jawanÃ¢â¬â ¢s excellent timing in a road race, beating many a Punjabi officer, by saying that his mother must have slept with a Punjabi. It is no secret that fair skinned people from the northern parts of India often display a superiority complex vis-a-vis people of the rest of the country. Within the boundaries of other states too, fair skinned people think they were made to rule the others. Is this kind of thinking a vestige of the caste system or is it something else?

Is Giriraj Singh alone in making racist remarks or do more educated Indians think along these lines?