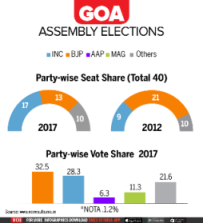 Editor-in-Chief of indiacommentary.com. Current Affairs analyst and political commentator. Writes for a number of publications. View all posts by this Author
Despite the Congress allegation about the BJP using money power to steal the verdict in Goa, the fact is that the indecisive Congress was outpaced, outfoxed and outmaneuvered by a smarter and vigilant BJP. The Congress says that the BJP was rejected by the voters as it did not secure the majority. By the same logic, even the Congress could not get past the half way mark, so it was rejected too. Granted it won more seats than the BJP, but in the other parameter of voter endorsement  that of vote share  it was behind the BJP by nearly 4 percentage points. The BJP got 32.5% votes while the Congress got just 28.4%. So neither party can conclusively claim that it was endorsed by a majority of the voters, even by the standards of the Indian first past the post election system.

Let us now move to government formation. Although convention demands that the party with the highest number of MLAs be given the first shot, this is not something sacrosanct or a written rule or law. If the governor is satisfied that no point will be served by calling the leading party (which is short of majority) and if another party submits a list of support by other parties including independent MLAs proving majority, the governor is well within his rights to give that other party the first chance. In Goa, it was clear that despite the Congress winning 17 seats to the BJPs 11, it was in no position to form the government as the two other big regional parties, the Maharashtrawadi Gomantak Party (MGP) and the Goa Forward Party (GFP), with three seats each, were not inclined to support it. On the contrary, MGP being a former alliance partner of the BJP was expected to return to the fold. Post poll alliances that can cobble up majority will lead to stable governments. In fact, if Congress was invited to form the government, it would have led to intense horse trading.

That the Congress itself was a divided house came to light after Manohar Parrikar won the trust vote. Party MLA Vishwajit Rane absented himself from the assembly during the vote despite a party whip and resigned his seat and left the Congress immediately thereafter. He alleged that the party central leadership was not interested to form the government. He said he had written to Rahul Gandhi about this without getting a response and was left with no option but to quit Congress. The problem with the Congress is that decision making is too slow. The party runs like the Indian bureaucracy  mired in red tape with no clear chain of command and transparency. Party leaders fear to take quick and hard decisions as they have never been groomed to be leaders and do not have the power or ability to take independent decisions. They just follow what the high command says. In case of Goa and Manipur, the high command was too late in getting off the block.