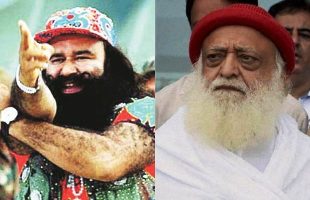 By our team of in-house writers. View all posts by this Author
People are talking about Gurmeet Ram Rahim and other babas and their controversial lifestyles. People are saying that this has been made possible by the unholy nexus between the babas and politicians of all hue, which in effect means a nexus between religion and politics. People rue the fact that apart from amassing huge wealth, now these self-styled godmen are being exposed as lechers of the highest degree.

First Asaram and now Gurmeet have been accused of rape. Gurmeet has been convicted and sentenced while the Supreme Court has scolded the Gujarat government for the delay in Asarams case. It is certain that Asaram will also be convicted. People say that this just goes on to prove that godmen are actually wolves in sheeps clothing.

People say that despite such high profile cases and convictions, religion is such an opiate and religious gurus are such a hit that their popularity shows no sign of ebbing. Every criminal thinks he is too smart to be caught. Likewise, people say every bhakt thinks his guru is not like Asaram or Gurmeet.

People say that while these gurus preach detachment from worldly possessions, most of them live a scandalous lifestyle with luxuries of all kinds. Many of them imbibe liquor on the sly and are most comfortable in the company of women. They say that the property belongs to the ashram but as long as they live, they enjoy the most from the amassed wealth. People say that these frauds should be exposed one by one.

People are also saying that the government should examine the affairs of all religious trusts of all religions. Religiously backed fortresses  by whatever name called and belonging to whichever religion  should be subjected to periodic scrutiny by security forces to ensure they do not become store houses for arms and hiding place of goons and terrorists. People say no one should be allowed to carry out nefarious activities by hiding behind a religious avatar.