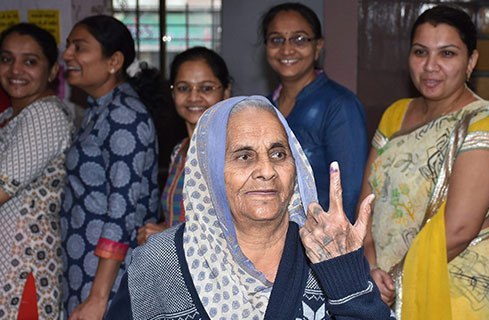 Editor-in-Chief of indiacommentary.com. Current Affairs analyst and political commentator. Writes for a number of publications. View all posts by this Author
Gujarat voted in the first phase of elections on Dec 8. There was a huge buzz the whole day but in the end the voting percentage was only 68, a good 3.5 points lower than 2012. Congress leader Randeep Surjewala perhaps jumped the gun when he said that when people vote in such huge numbers, it is usually a vote for change. For, the numbers are lesser than those in 2012 and that year they had voted for the BJP.

Although there have been a lot of changes since then  notably, two changes in chief ministers, strong-incumbency, anger over demonetization and GST, farmer resentment at poor support price of crops, the Patidar agitation and social engineering by a rejuvenated Congress  the bottom line seems to be that though people are angry with the BJP, they are not yet ready to ditch it completely.

All things point to the fact that the BJP is going to retain its core support and the opposition has not been able to stitch together a caste-religion combine that can overtake it. Firstly, the opinion polls give BJP a comfortable (though nowhere near the ambitious mark Amit Shah had set) number of seats to form the next government. Secondly, the betting market (often a good barometer as punters put their money where their mouth is) places the Congress at 1:3 to form the government. Thirdly, in a famous reply, a trader is reported to have said that while the community is angry with the BJP, they will still vote for it as hum naraaz hain, gaddar nahin. Fourthly, Mani Shankar Aiyar queered the pitch for the Congress by calling Modi neech. Modi gained immense political capital by playing on the remark. Lastly, the coming together of Hardik Patel, Jignesh Mewani and Alpesh Thakor with the Congress has induced fear in the other communities about the impending quota-raj if they come to power. This will work in BJPs favour.

But given the high pitch at which the Gujarat elections are being fought, anything less than 116 would result in a loss of face for the party. Rahul Gandhi knows this  as he also knows that he cannot help his party form the next government  and that is why he is working round the clock to ensure that the BJP tally is smaller than that in 2012.