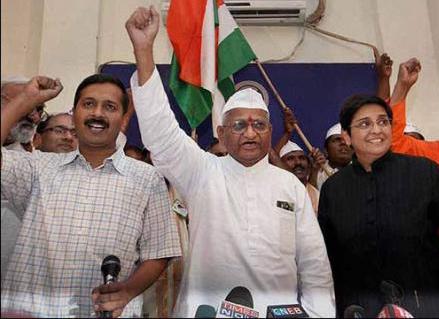 Hazare Must Expose Kejriwal By Moving Beyond Words

Hazare Must Expose Kejriwal By Moving Beyond Words

Editor-in-Chief of indiacommentary.com. Current Affairs analyst and political commentator. Writes for a number of publications. View all posts by this Author
Arvind Kejriwals one-time mentor Anna Hazare has been quite vocal in disapproving of Kejriwals political avatar. He realizes that Kejriwal used him and his andolan against corruption to pitchfork himself into national limelight, form a political party and seize power in Delhi. He thinks that Kejriwal has forgotten the lofty ideals associated with the drive against corruption to become just another sleazy politician, the kind that can be found in every lane in India. Hazare has disowned Kejriwal a number of times in the past too.

Hazares pique is understandable. He cannot be faulted if he thinks that the one he trusted so fully during the campaign for Lokpal has deviated from the path of transparency and probity in public life. The latest outburst from Hazare has come in the wake of the V K Shunglu committee report that has indicted the Kejriwal government of nepotism, disregard for law and financial irregularities. Reacting to the report, Hazare said that he was pained by the Shunglu committee report because Arvind was with me in the fight against corruption. I had great hopes from the young and educated Kejriwal and felt that young people like him will create a corruption-free nation. But he has dashed all my hopes. He also said that the Shunglu committee report shows that Kejriwal has forgotten everything in the pursuit of power.

But has not the time come for Hazare to move beyond words to start a campaign to expose Kejriwal before the people? After all, when he had started India Against Corruption, it was against the corrupt system. He became the embodiment of all anti-corruption forces. People, including Arvind Kejriwal, wore caps with the legend I Am Anna Hazare. Is Kejriwal now not insulting Hazares name, although Hazare is no longer associated with him in any way? Is Kejriwal now not a part of  in fact the leading light of, after the Shunglu report  the same corrupt system Hazare fought against? So should not he start a campaign to expose Kejriwal?