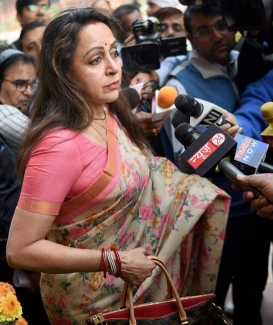 Holding an extreme view and carting the ball out of the park is what interests him most. He is a hard hitter at all times. Fasten your seatbelts and read. View all posts by this Author
No comment in response to a question by a news reporter seems to have gone out of fashion. Hence, even people (important people of course, as the media does not have time for commoners) who have nothing to say in respect of an event open their mouths and more often than not put their foot in it. Take the case of BJP MP from Mathura, Hema Malini. When asked about her reaction to the fire in Kamala Mills in Mumbai, Malini came up with the most bizarre answer: she said that the rising population in the city was responsible for the calamity. Her answer shows that either she was not prepared to give an answer and would have been better off by saying no comment or she is just plain stupid.

How, for Gods sake, is rising population responsible for a fire in an illegal pub under the watch of the Shiv Sena, an ally of the BJP in the city of Mumbai which again is in Maharashtra, a state ruled by the party to which Malini belongs? Did 20000 people from the bourgeoning population go and start the fire in the pub?

Hema Malini is no stranger to gaffes. When her constituency Mathura was burning under riots, she posted a tweet of her film shooting in Madh Islands near Mumbai. When actor Pratyusha Banerjee committed suicide, she tweeted that the world admires a fighter not a loser, thereby implying that Banerjee was a loser. She was immediately trolled with people calling her insensitive. She had also asked widows from Bengal and Bihar to not to come to Vrindavan (which falls in her constituency) as there were many temples in their respective states. And then she had the gall to claim in a tweet that she is a sensitive person!

Hema Malini and many others like her across the political spectrum are perhaps overwhelmed by the situation where the media chases them for sound bites. In case of Malini, people can argue that being a famous actor she is used to such attention. But paparazzi chasing stars and reporters asking for reactions are two different things altogether. In the former, one has to be at his or her dazzling best and get away by saying little. But in the latter avatar, one has to give considered replies to questions. Hema Malini is sadly found wanting in this regard and would be better off by keeping her mouth shut.