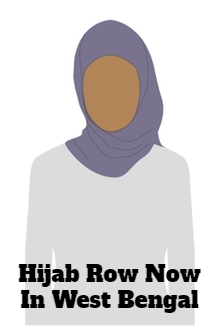 In a serious confrontation, the first of its kind in West Bengal, trouble erupted at a school in Howrah when two groups of students came to blows after a group wearing religious scarves (called namabali locally) over their school uniform were stopped from entering the premises. This group had worn the scarves as another group of students was allowed to wear the hijab. Matters escalated after the first group did not listen to school authorities and came to blows with the other group.

When the hijab row was at its peak in Karnataka, there were no such incidents in West Bengal. Muslim girls have always been allowed to wear the hijab and even cover their legs in matching slacks or leggings despite it not being a part of the school uniform in the state. It is not uncommon to see Muslim girls in the state wear a slack or legging beneath their skirt while all other girls are only in skirt. The incident in Dhulagori Adarsh Vidyalaya in Howrah district of the state was the first of its kind and if not stopped, has the potential of spreading fast. The administration deployed teams of Police and Rapid Action Force to defuse the situation.

It needs to be recalled that while the Karnataka HC had ruled that wearing the hijab was not an essential practice in Islam and the government could enforce dress (school uniform) code and disallow students from wearing it, the Supreme Court had delivered a split verdict on the issue and a larger bench will examine the matter afresh. Till then, of course, it is upon the state administration to take a call on the matter. Since West Bengal has been allowing Muslim girls to wear the hijab over the school uniform, miscreants must not create disturbances and must wait for the Supreme Court to deliver a final verdict on the issue.