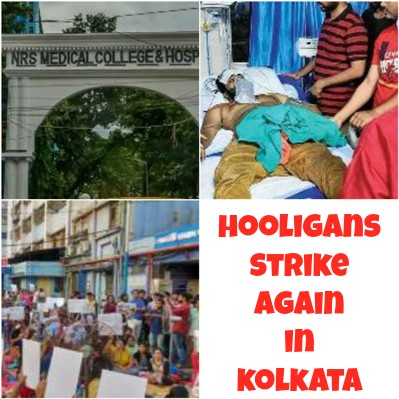 Three decades of Left rule and then almost a decade of TMC rule have embedded hooliganism in the character of Kolkata to such an extent that even the smallest of things can bring out the lumpen elements in a flash and in large numbers and they can cause widespread damage to men and material. What happened at NRS Hospital in the heart of Kolkata on June 12 is a continuation of this vile practice.

A septuagenarian patient died in the hospital. The relatives of the patient first accused the doctors present of negligence leading to the death and then went to their area to return with two truckloads of men armed with sticks and other weapons. These men then went after two junior doctors, beat them up mercilessly and caused damage to hospital property too. Junior doctors at the hospital have struck work, refusing to work in the face of such hooliganism.

This has been a recurring feature in Kolkata. Every now and then someone dies in a hospital and relatives and local people enter the premises to cause damage to property and beat up the staff, including senior doctors. While BJP leader Mukul Roy tried to give a communal colour to the incident, the present incident was caused by a particular community as the person who died belonged to that community. But in the past, people from all communities and all walks of life have allowed inflamed passion to get better of reason and have indulged in such shameful acts in Kolkata.

People of Kolkata have been increasingly taking the law in their own hands to deal out mob justice. Be it a car allegedly involved in an accident and belonging to a housing complex or a couple allegedly getting too cozy on a metro platform or girls returning from work late at night, the mob is increasingly poking its nose in the private affairs of citizens or in cases where the police should be involved. This is possible only because the administration does not take strict action against those involved, despite the presence of CCTV cameras at most locations. The political will to punish people who come from particular vote banks is lacking and this emboldens these hooligans.

If Kolkata is to retain its tag of being a friendly city and if services are to run smoothly in the city, the administration must leave aside vote bank politics and must come down heavily on the perpetrators of the violence at the NRS Hospital. An example must be set and others like them must be told in the strongest of words that such incidents will not be tolerated. Only then will it pacify the striking doctors and the citizenry that they are safe from these hooligans.