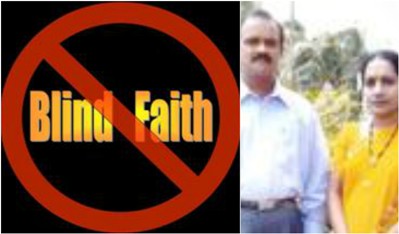 In India, superstition and blind faith score over education and rational thinking most of the times. This was proved once again when a family of three, an orthopedic surgeon, his wife and their physician son committed suicide after being conned out of Rs 5.5 crore by a "rice-pull" gang in Amalapuram in East Godavari district in Andhra Pradesh.

The rice-pull con trick is an age-old method in which a person or a group of persons dupe others by claiming to possess magical rice that can attract gold or can double their money. In this case, a gang of four convinced the doctor and his family that they will double what the doctor can give them. The unsuspecting (or foolish?) doctor borrowed Rs 5.5 crore at usurious rates of interest from local money lenders and paid the gang in installments. Once the final payment was made, the gang vanished.

The family, unable to face the creditors who must have realized that the doctor had been conned and must have pressurized them, entered into a suicide pact and ended their lives. The police have arrested one member of the gang and special teams have been formed to apprehend the remaining three.

It is surprising that in this age and time there are educated people who have such deep-rooted beliefs and superstitions and who can be conned in this fashion. People make hundreds of inquiries before investing small amounts in shares or mutual funds but think of nothing before giving such large amounts to complete strangers. More than greed, it is the religious belief and superstition that such powers exist that makes them part with their money.

Unless people inculcate rational thinking, forsake blind faith in rituals and abhor superstition, they will remain easy prey for gangs who feed on their religious beliefs. If money could be doubled by rice pull, the government would not have to worry about fiscal deficit and raid the RBI for a 'measly' sum of Rs 1.76 lakh crore. Narendra Modi would have easily put Rs 15 lakh in the bank account of every Indian (if they needed it, for they could have easily continued to double their money with rice pull and would not have needed government doles) as per his promise and his party would not have to call it a political 'jumla'. The good doctor should have realized that there are no fortune cookies (or rice, in this case) in this world.