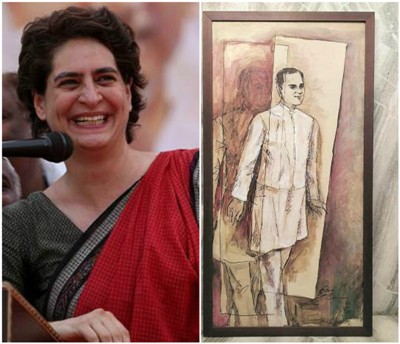 People are talking about how people with the right connections coerce businessmen, who do not always follow the straight path, to do various things that they would not normally do. The issue is about the painting of Rajiv Gandhi, painted by M F Husain and owned by Priyanka Gandhi Vadra, which was sold to Yes Bank promoter Rana Kapoor for Rs 2 crore. It is being said that Mumbai businessman and Congress leader Milind Deora kept on applying pressure on Kapoor until he agreed to buy it.

People say that if Priyanka Vadra was in need of money, she could have held an auction for the painting. But people say that that would have led to a scandal as a daughter selling her dad's painting, whatever, and however urgent the need be, is something frowned upon in high society. People say that the transaction was done in such a manner that it would have never been exposed had Yes Bank not gone bust.

People also say that if the painting was auctioned, it would not have found a buyer outside the inner circle of the Gandhis or perhaps the chamchas who wanted to get into their good books. Also, almost certainly, it would not have fetched a price beyond Rs 70 lakhs (going by the amounts fetched by Husain's lesser-known paintings at auctions abroad). People say that it was highhandedness on part of the Congress to force a businessman to buy the painting from Priyanka Vadra at such a fancy price.

People are of the opinion that such arm twisting is common and businessmen often say that they have to earn in black only to pay politicians and bureaucrats who raise demands on them. It is a case of what came first, people say, chicken or egg, as the government and bureaucrats are heard saying that they 'fleece' businessmen because they violate the law and evade taxes. But whatever be the reason, people say that such deals are obnoxious and smack of misuse of power. People say that Priyanka Vadra will rightly have to answer a lot of questions now.