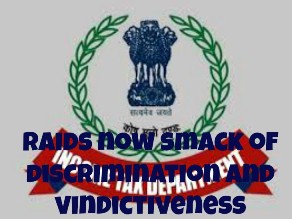 Editor-in-Chief of indiacommentary.com. Current Affairs analyst and political commentator. Writes for a number of publications. View all posts by this Author
When the Income Tax department carried out raids in Karnataka and elsewhere in India a couple of weeks back, this writer was of the opinion that the political protests that erupted in Bengaluru were out of place since the department, acting on specific information, had raided a whole gamut of industries and services, including people with political exposure.

But the current raids on close associates of Madhya Pradesh chief minister Kamal Nath do not fall in the same bracket. These raids, just a few days before the voters start exercising their franchise, smack of vindictiveness and are discriminatory and arbitrary. Even the Election Commission, often accused by the opposition of bias towards the ruling party at the Centre, has taken note. It has asked the Centre to desist from such raids during election time and if they cannot be postponed then has asked it to be politically neutral, impartial and non-discriminatory and give prior information to the Commission.

Although there is a need to curb the use of money power in elections and politicians often use their cronies to carry out the dirty work, it is not as if only the opposition uses money power to influence voters. The way the raids are being carried out, it seems the BJP is eager to show that it is above board and all others are tainted. People close to parties that are not aligned with the NDA are being targeted all over India by the Income Tax department. One refuses to believe that the specific information that is coming to the department is only for cronies of opposition leaders. It is obvious that such information against leaders of NDA constituents is being ignored and brushed under the carpet.

The Centre must understand that in this age of complete political awareness, strong regional parties and the omnipresent media it cannot carry out such blatantly one-sided operations. The malaise of money power in politics, especially during election time, needs to be curbed  even eradicated  but with an even hand. It is the ruling party that has cornered a major part of the political funding received by all parties. Hence, logically, it is best placed to use money power in these elections. Then why is it that none of those who work for the party are being raided? Are they all dudh ka dhula as they say in Hindi for those who are supposedly as pure as the driven snow. Is the Centre following the maxim "jiski lathi uski bhains"?