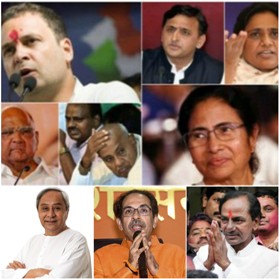 Index Of Opposition Unity After Maharashtra

Index Of Opposition Unity After Maharashtra

After the Shiv Sena-NCP-Congress alliance in Maharashtra, political commentators have again started talking about how it has changed political equations and can form the basis of future alliances, even on a pan-India basis, against the BJP. This talk gained currency during the Mahagathbandhan in Bihar and even after the Bhua-Bhatija (SP-BSP) experiment in UP. The alacrity with which they come together is always much less than the acrimony with which they break-off with each other.

While there is a need for a strong opposition against the BJP, such alliances of convenience, as the one formed in Maharashtra, are not the answer. The coming together of parties that are not on the same page on most issues and fought the elections against each other but want to form the government just to spite the BJP is a marriage that results in divorce, sooner rather than later. Maybe the government in Maharashtra will last its full term but it is still not the way to beat the BJP.

The BJP can be beaten. It is not immune to anti-incumbency as was proved in Rajasthan, Madhya Pradesh and Chhatisgarh. It got nearly beaten even in Narendra Modi's home state Gujarat. It does not have acceptance in many states as was proved in Punjab, Telangana, Andhra Pradesh, Tamil Nadu, Kerala, Orissa and West Bengal.

But such alliances of convenience are not the answer. The opposition has to first understand that the people vote differently in assembly and Lok Sabha elections. If they continue to gloat over the smaller picture, they will miss the larger one. The 2019 elections were held in the backdrop of several decisions by the NDA government that put people into a lot of hardships. Acche din, as promised by Modi in 2014, were nowhere to be seen five years later. The situation was pregnant with anti-incumbency.

Yet, the opposition allowed Modi to run away with a near landslide victory. What does this suggest? It suggests that despite scoring victories at the state level, most regional political parties and the Congress have failed to fire the imagination of the people when it comes to the nation as a whole. This is not to say that the BJP is unbeatable at the national level or that the Modi brand is all-pervading. The proof is provided in the percentage of votes the BJP gets on a pan-India basis which is much below 50%.

What the opposition needs are not such alliances of convenience but a concerted effort, broken down to the seat level in each state. They have to ensure a one-to-one fight with the BJP by leaving each Lok Sabha seat to the party best placed to beat it. But their personal differences and the overriding wish of regional parties to protect their turfs will not make it happen. Further, it is doubtful whether the people would still accept it as Modi has made them become fearful of a khichdi government at the Centre.