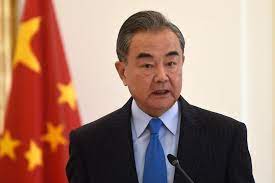 Chinese foreign minister Wang Yi is expected to visit India next week. This had raised expectations that there will be high level talks between the two countries on a host of issues, including the LAC ingression issue that has not been resolved despite several rounds of military commander-level talks. China had even proposed recently that the two countries engage in 'civilization dialogue' and allow cultural exchanges between the people of the two nations, especially in the business and film industry domains. Foreign minister Yi's visit was expected to build on that.

But before coming to India, Yi is in Islamabad to attend the meeting of the Organization of Islamic Countries (OIC) as a special invitee. At the OIC meeting Yi reportedly referred to Jammu & Kashmir is his speech and said that China will continue to support the people of Palestine and J&K in their "just freedom struggles" as it has the "same desire" as its Islamic friends on the issue of Kashmir.

This has raised heckles in India. The Indian external affairs ministry has strongly condemned Yi for raising the Kashmir issue in the OIC meeting. Ministry spokesman Arindam Bagchi said "we reject the uncalled for reference to India by the Chinese foreign minister Wang Yi during his speech at the opening ceremony. Matters related to the Union Territory of Jammu & Kashmir are entirely the internal affairs of India. Other countries, including China, have no locus standi to comment. They should note that India refrains from public judgment of their internal issues."

Although India has always maintained that peace and tranquility along the border is essential for normalization of relations with a country, it was expected that Wang Yi's visit would give both nations a chance to resume high level talks to settle the vexed border issue. But Yi's remarks in Islamabad have once again cast a shadow over the visit which has not been confirmed as yet by either country.