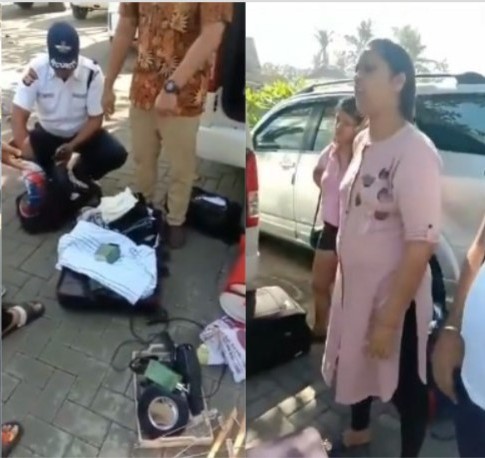 People are talking about a disgraceful video that shows an Indian family being caught red-handed stealing hotel accessories. Their luggage was opened and many things that they were supposed to use but not remove were found in their luggage. The security officer is seen asking them to explain while the members of the family keep saying "we are sorry" and that they are willing to pay for the items. But it was too late by then, If the family wanted to take certain things, it should have first asked the hotel and paid for them before putting them in the luggage.

People say that this video, which has gone viral on social media, will lower the prestige of all Indian travelers and will make hotel authorities treat them with suspicion. They say that it will become a standard practice to randomly check the luggage of all Indians who check out of their rooms. People say alternatively, the hotel staff will first check the rooms to see that nothing is missing before allowing the Indian guests to check out.

People say that it is a matter of shame that even those who can afford to travel abroad can fall prey to such dubious tactics. People are of the opinion that it is nothing but greed and an attraction to travel-friendly packaging of items in hotel rooms (such items are seldom available in the market as they are specially packed for the hotels) that lure people into stealing them.

People say that this video will bring shame to all Indians who travel abroad, especially to east and far-east Asian countries. People are of the opinion that the government should sensitize people traveling abroad, along with the travel trade, to ensure that such incidents are not repeated. Travel site ixigo.com has put out a video that informs people what can be, and cannot be taken from a hotel room. There should be more such efforts from the trade who will bear the brunt if Indian travelers are banned from hotels abroad.

See what you can and cannot take from hotel rooms in a video by ixigo.com