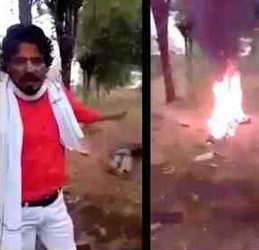 Holding an extreme view and carting the ball out of the park is what interests him most. He is a hard hitter at all times. Fasten your seatbelts and read. View all posts by this Author
Hitting a man with a pickaxe until the fellow dies and then burning him is disturbing enough. But it is more obnoxious to have the act videotaped by a minor neighbor. Finally, it is highly mischievous to upload the same on social media.

The murder of Affarazul Khan, a labour contractor from Malda in West Bengal, near Rajsamand in Rajasthan is highly deplorable and must be condemned. The Rajasthan police must be commended for acting swiftly to arrest the perpetrator. It is too early to term the murder a hate crime just because the killer raved about love jihad on the video. It could be a simple case of personal enmity borne out of Khans supply of relatively cheaper labour from Bengal and consequent loss of jobs for locals. We should let the police enquiry be complete before jumping to conclusions.

But the Bengal government is right in asking Rajasthan to ensure the safety of labourers from the state working there. As it is, labourers from Bengal are often confused with illegal Bangladeshi immigrants and have to face numerous difficulties in other states. If murder is added to that list then it will become very difficult for Bengalis to earn a living outside their state. Already, mothers from Malda are asking their sons to return home.

Mamata Banerjee is right when she says that the daily dose of hate being preached by Hindutva elements in their speeches is creating an atmosphere of intolerance in the country. It is sad that self-styled protectors of the Hindu religion are dividing people over religion and making them excited enough to commit murders. If Khans murder was a hate crime, Shambhulal Raigar, the murderer, must be given an exemplary punishment that would deter others from committing such acts.