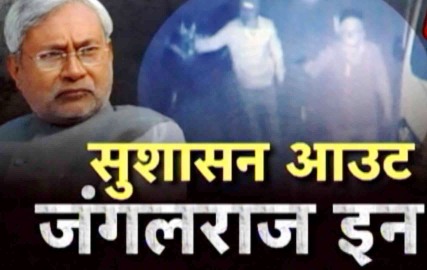 Is It Return of Jungle Raj in Bihar?

Is It Return of Jungle Raj in Bihar?

Editor-in-Chief of indiacommentary.com. Current Affairs analyst and political commentator. Writes for a number of publications. View all posts by this Author
pic courtesy:aajtak.in

Rising crime in Bihar
What is happening in Bihar? First, in what is being erroneously called a road rage case (it was more a âVIP son flexing his musclesâ case), Rocky Yadav, son of JD(U) MLC Manorama Devi, killed a young man in cold blood after he was not allowed to overtake the car being driven by the slain youth. Then, a senior journalist was killed by miscreants in Siwan. Finally, in a daring attack on security personnel, one jawan was killed on a train in the state. All the goodwill Nitish Kumar had generated with good governance in his first stint is fast evaporating within six months of his second innings. Nitish was definitely instrumental in improving the law and order situation in the state and ending the rangdari culture to a large extent. But these incidents show that old habits die hard and BJP is already claiming the return of jungle raj in the state.

Will RJD bahubalis flex their muscles?
Politics apart, there are several reasons why Bihar might lapse into lawlessness again. First, the alliance with RJD of Lalu Yadav in the government will bring back the people who were responsible for the sorry state of affairs in the state before Nitish took over. The Mahagathbandhan that stopped the BJP from gaining Bihar might well turn out to be Nitishâs undoing in the long run. RJD has always thrived on bahubali power and bahubalis need to flex their muscles from time to time to keep them active. The RJD will also try to muscle in and regain constituencies where it has lost influence. This cannot be achieved without violence and the administration has to be very strict to prevent it.

Tu jaanta hai mera baap kaun hai?
Then, within his own party, there are fortune seekers and recent crorepatis (Rocky Yadavâs father is reported to have made much wealth in the last 6 years) whose sons will frequently ask people âdo you know whose son I amâ and indulge in whatever pleases them, regardless of the fact that it is illegal. Jiski lathi uski bhains is an old saying in Bihar and it is followed to the hilt by all ruling parties. If Nitish was able to rein in miscreants in his party in his first stint, it was a job well done. But he seems to be losing his touch this time around.

Liqour mafia to contend with
As Nitish has struck hard at the liquor lobby by making Bihar a dry state, the liquor mafia, within Bihar and from neighbouring Bengal, UP, Jharkhand and even Nepal, will try to supply illicit liquor in the state. Alcohol smuggling will result in regular brushes with authorities and will give birth to new gangs. Since it is a very paying business, it will also mean rise in corruption and violence as turf fights will be common among wannabe illicit liquor barons.