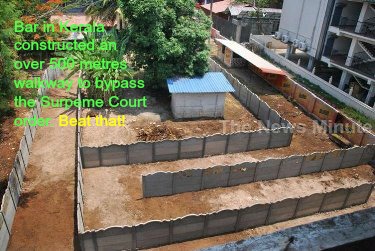 Jugaad to Bypass SC Ban on Liquor Sale Near Highways

Jugaad to Bypass SC Ban on Liquor Sale Near Highways

Editor-in-Chief of indiacommentary.com. Current Affairs analyst and political commentator. Writes for a number of publications. View all posts by this Author
The Supreme Court order on not allowing sale of liquor by any means within 500 metres of highways has unleashed a tsunami of jugaad, that unexplainable Indian habit of finding a way out. State governments have joined private players in devising new methods to bypass the ban.

The Supreme Court was not entirely correct in enforcing the ban as it sought to prevent sale instead of penalizing drunk drivers. The logic was convoluted as if there has to be a ban, then it should be on manufacturing and distribution, rather than sale at any place, including in the vicinity of highways. Further, liquor is not an impulse purchase. One does not buy and consume liquor on spotting a liquor shop. If truck drivers or other motorists cause accidents after drinking, they will continue to do so until the law banning driving under the influence of alcohol is strictly enforced. In any case, those drivers who wish to drink will always have wheels at their command and 500 metres is not much of a distance if they get into the mood.

But the jugaad being undertaken to bypass the ban has assumed immoral  and comical  connotations. State governments have begun to outdo each other in de-notifying highways passing through towns and cities in order to protect their excise revenue. There is no policing of the ban and several reports have shown that liquor is being sold in complete violation of the SC order. In a comical off-shoot, a bar in Kerala has created a maze at its entrance and the walking distance is more than 500 metres to reach its counter. Viola! It has ensured that it is not violating the apex court order. What will the lordships do about this?

Liquor is big business, both for the manufacturers and the government. Some states survive exclusively on liquor excise and exorbitant licensing fees. Hence, despite pontificating on its ill effects, few state governments are ready to enforce prohibition. In fact, states like West Bengal have considerably eased their liquor licensing policy to allow bars to open an off-shop on the same premises. Shops have been allowed to be kept open more days per year.

Given the scenario and the efforts to bypass the ban, as also the fact that those who want to drink will plan ahead and keep stocks in their vehicles or take a small detour to buy liquor, the Supreme Court should reconsider the order. It should instead prod the government to take strict action against those who drive when drunk. That would be a better way to reduce accidents caused by drunk drivers.