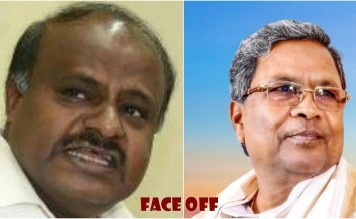 Yogendra is undecided whether he wants to be a writer. So he writes to see if he can be a writer. Ha Ha View all posts by this Author
Much as the Congress-JD(U) coalition in Karnataka accuses the BJP of plotting its downfall by snaring MLAs, the contradictions in the alliance come to the fore time and again. This time, chief minister HD Kumaraswamy is so piqued by comments by some Congressmen that he has threatened to resign. Earlier too, HDK had broken down at a public meeting as he was unable to bear the pressure of running the alliance government.

The mischief this time was created by Congress MLAs who are supporters of former chief minister Siddaramaiah. They had said that Sidda was their chief minister and had chided Kumaraswamy by saying that no development was taking place in the state after he had assumed office.

Kumaraswamy was angered to the point of threatening to resign. He told the news agency ANI that If they want to continue with the same thing, I am ready to step down. They are crossing the line." In a damage control exercise, state Congress chief D Gundu Rao said that such statements by Congressmen were unacceptable. His public statement is inappropriate. I condemn it and I will issue a show-cause notice to him, Rao said. But Siddaramaiah downplayed the issue by accusing the media of creating differences. He also said that he would talk to Kumaraswamy about it.

It is clear that the state Congress leaders, especially Siddaramaiah and his group, are not comfortable with having Kumaraswamy as the CM as Congress has more than double the MLAs. They had accepted the high command decision after the victory as at that point in time, there was no other way to keep the BJP out. But they must realize that by angering Kumaraswamy, they are playing into the hands of the BJP which is waiting for an opportune time to strike and break the alliance.

Siddaramaiah and his group still have hopes of grabbing power. But with just 80 MLAs to the BJPs 104, their hope is more a daydream. If they antagonize the JD(U), the alliance will break and if the alliance breaks, it will be easier for the BJP to snare MLAs from both the JD(U) and the Congress. Then, let alone the CMs chair, power itself will slip out of their hands.