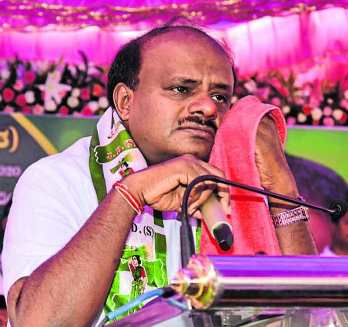 Editor-in-Chief of indiacommentary.com. Current Affairs analyst and political commentator. View all posts by this Author
HD Deve Gowda has said that he fears for his sons health as Kumaraswamy is working 18 hours a day. The Karnataka chief minister has himself said that he feels like Lord Shiva, having drunk the poison of forming a gathbandhan government with the Congress. Kumaraswamy was so distressed that he started crying during a meeting of JD(U). The chief minister is under fire from all quarters. Some of his own party men are not cooperating with him, apparently for not getting portfolios in the government. The Congress is applying pressure on many fronts. The officers, having been there in the previous Congress government and perhaps recognizing that this partnership is not going to last, are presumably not listening to him. Kumaraswamy himself commented that it took him a lot of convincing for them to get ready for the farm loan waiver. Kumaraswamy also said that if it was not for his strong desire to serve the people, he would have resigned in two hours.

This is a sorry state of affairs. For a coalition government to work with a degree of stability, all stakeholders have to cooperate. In such governments, collaboration is the key to success. But this is clearly not visible in Karnataka. Even if the Congress high command wants Kumaraswamy to have a happy stint, if for nothing else than to keep the BJP at bay, it has to contend with the ambitions of former CM Siddaramaiah and rising star DK Shivakumar. Both of them are miffed at Rahul Gandhi for having capitulated fully and allowed Kumaraswamy to become the CM with only 37 legislators. The high command cannot do much to silence them as both the leaders, especially Siddaramaiah, command a huge following. Sidda has been a turncoat in the past. He may leave the party if pushed too far. Hence, the Congress is not going to discipline its leaders. The onus is upon Kumaraswamy to carry them with him to satisfy his burning desire to serve the people. He must remember that if the coalition falls apart, the only beneficiary will be the BJP, a party he loves to despise.