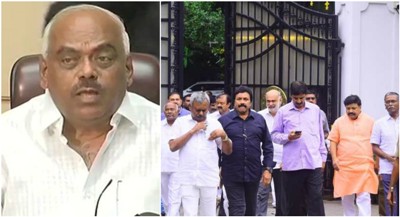 Ignoring the Supreme Court directive to decide on the issue today, the Karnataka assembly Speaker, KR Ramesh Kumar has said that he has to look into all issues and follow the Constitution. More particularly, he said he âcannot work at lightning speedâ to accept or reject the resignations of the rebel MLAs.

This is astonishing. What is there to look into? The rebel MLAs were told by the Supreme Court to meet the Speaker in person by 6 pm today. They did so. Each one of them is reported to have personally told the Speaker that they have resigned. If their resignations were not in the correct format, following the apex court ruling, the Speaker should have asked them to resubmit the same immediately and should have taken the decision as per law. If he cannot work at lightning speed, he should not also work at bullock-cart speed.

There is nothing much the Speaker can do as per law. He has to accept the resignations. If the resigning MLAs are able to form a separate group as per the Anti-Defection Law (they do not have the numbers to do so in this case), the Speaker will have to allow that. If not, he has to accept the resignations and there will be by-elections in all the constituencies. But by sitting on the resignations and buying time by hiding behind legalities, Ramesh Kumar is trying to both frustrate the rebels and allow the alliance time to bring them around. If the BJP was guilty of allegedly engineering the defections and subverting democracy, the alliance, through the actions of the Speaker, is also guilty of delaying the due process of law.

It is clear that if all resignations are accepted and the count of MLAs shrinks in the assembly, the Congress-JD(S) government will not survive. The Speaker is allowing them time to try and get back as many MLAs as they can through his delaying tactics. One is sure that the Supreme Court is not going to overlook this. The Speakerâs actions are likely to invite adverse comments from the bench and they might even order him to do the needful, at lightning speed, tomorrow.