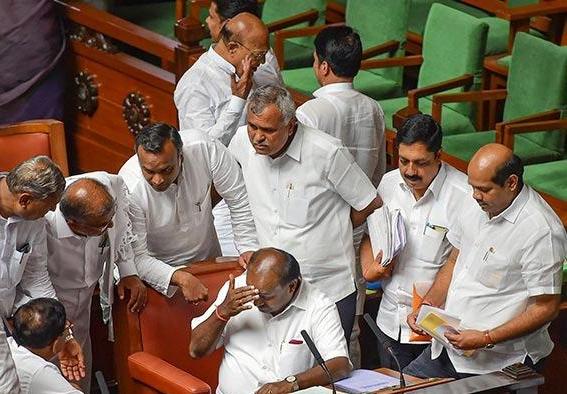 Karnataka: Theatre Of The Absurd

Karnataka: Theatre Of The Absurd

A theatre of the absurd is being played out in the Karnataka assembly for the last two days. The Congress, the BJP, the state Governor Vajubhai Vala and the assembly Speaker KR Ramesh Kumar are all guilty of defaming democracy in full view of the whole world. To further confound the situation, the Supreme Court is being approached by both the political parties and the rebel MLAs on points of law. The matter has reached such a pass that it would not be improper to say that it seems none of the present laws in India are adequate enough to prevent politicians from making a spectacle of themselves.

What started as a resignation spree from Congress and JD(S) MLAs (helped, without doubt, by enticement from the BJP) who wanted to desert a sinking ship, has now descended into a battle for survival for the Congress-JD(U) alliance (helped, in turn, by a visibly partisan Speaker). The Governor has thrown his hat in the ring by writing letters fixing deadlines to hold the trust vote which has been ignored by the Speaker as the Governor does not have the power to direct the Speaker. He can at best send a report to the home ministry on the goings-on.

Despite knowing that they do not have the numbers, the alliance is perhaps banking upon the idea that some of the rebel MLAs will get frustrated by the delay and switch sides once more or that it will get some kind of relief from the Supreme Court. But it seems that the time has run out for the alliance. None of the rebels have indicated that they will change their minds. The Supreme Court is not likely to involve itself in matters of the assembly or the trust vote. Come Monday and the alliance will lose the vote, but not before having shown the world that those who are picked by the people to make laws twist the same laws disgustingly.

The current fiasco shows that it is time now to revisit the Tenth Schedule of the Constitution and various other laws pertaining to legislative assemblies and the powers of both the Governor and the Speaker. If the present laws were clear cut, the current spectacle would not have played out. Hence, the need is to insert rules for clearly specifying what the Speaker needs to do once an MLA submits his resignation, the time frame within which he must decide on the issue, the time frame within which a motion for trust must be put to vote and several other issues that have come up.