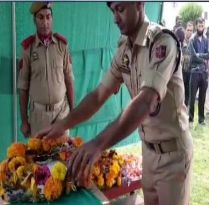 Kashmir Needs Carrot And Stick Both

Kashmir Needs Carrot And Stick Both

View all posts by this Author
The government must move fast against those who killed three policemen in Jammu & Kashmir. The abductions and killings were conducted by terrorists to carry out their threat of killing those who did not resign from government service. It is obvious that they would target security forces first as that will spread fear among others. If the common man finds that terrorists can abduct and kill security personnel or their relatives at will, how will he feel secured? Three weeks earlier, terrorists had kidnapped relatives of policemen but had released them. Further, getting recruits for the J & K police will become a hard thing.

The new governor, Satyapal Malik, is having wide ranging consultations with all concerned to bring peace to the state. Pakistans agents know this. Hence, they will try everything in the book to negate his efforts. They know that if they target security forces, they will react fiercely. There will be search and seizure operations where some innocents will be caught in the crossfire. That will lead to further unrest and renewed disturbances. The government has to break this vicious circle somehow.

Confidence building measures are the need of the hour. The citizenry must be made to feel that the government and the security forces are there to help them. The terrorists and Pakistani agents have spread so much misinformation that the common man distrusts both the government and the security forces. The government must counter this. The citizenry must be made to realize that the special status of Kashmir gives them benefits which are not available to other Indians. Hence, they should help the government in neutralizing the Pakistani agents and bring development and peace to the state. This is no doubt a difficult task given years of mistrust, but it has to be done if Pakistans evil designs are to be foiled. The government must take the help of the Kashmiri civil society to achieve this.