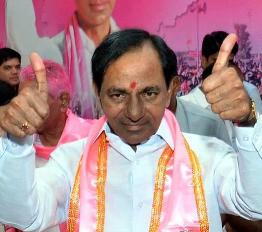 KCR Is Boss In Telengana

KCR Is Boss In Telengana

Linus tackles things head-on. He takes sides in his analysis and it fits excellently with our editorial policy. No 'maybe's' and 'allegedly' for him, only things in black and white. View all posts by this Author
When KCR dissolved the Telengana assembly nearly eight months before elections were due to seek a fresh mandate from the people, most observers termed it as a huge gamble. This became even more pronounced when the chief minister started talking about a non-Congress, non-BJP alliance at the Centre. Further, when a mahakutami  or a grand alliance took shape in the state with the Congress, the Telugu Desam and the Telengana Jana Samithi (TJS) joining hands with several smaller parties  it seemed that KCR had a fight on his hands. But, as the results show, the people have voted for TRS in larger numbers and KCR is back for a second term.

What clicked for KCR was the healthy rate of growth of the state in general and Hyderabad in particular. In the last few years, the metropolis has grown exponentially and is now giving tough competition to Bangalore. He also had a good number of welfare schemes and gave many freebies to the poorer sections of the society. He also had a relatively clean image although the opposition had levied charges of nepotism and corruption against him and his family. He is also seen as a mascot of Telengana pride.

What did not work for the mahakutami was the inclusion of Telugu Desam. People in Telengana have an instant dislike for Chandrababu Naidu and his party as he is seen as someone who opposed the formation of the state tooth and nail. They also remember that he wanted to take Hyderabad too. Then, the Congress too is not liked well. Even Asaduddun Owaisi asked the Muslims not to vote for the Congress. The TJS was a hastily formed party which did not have the wherewithal to fight the election, despite the reverence in which its founder M Kodandaram is held.

Although TRS has won a second term, he must not allow nepotism and corruption to anger the people. He must also continue with the policy of attracting investment by having investor-friendly policies and must ensure that while Hyderabad is developed in a planned way, other cities are not neglected. Telengana is attractive to investors as it has a pool of educated workers with good work culture and no militant trade unionism. KCR has a good record  he should now build on it in the second term.