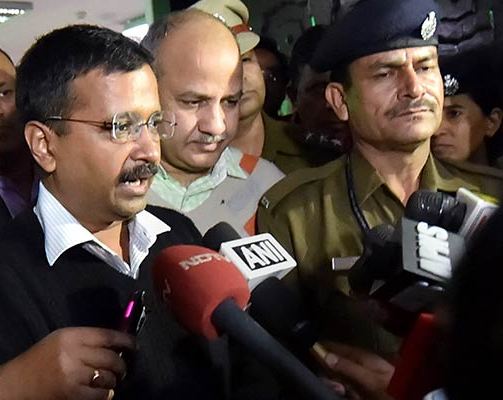 Kejriwal Uses the Language of a Hardened Loafer

Kejriwal Uses the Language of a Hardened Loafer

Editor-in-Chief of indiacommentary.com. Current Affairs analyst and political commentator. Writes for a number of publications. View all posts by this Author
What is Arvind Kejriwal trying to prove? By abusing and calling PM Modi all sorts of names just because the CBI raided the office of Rajender Kumar, his principal secretary, over complaints of corruption, he is just showing his frustration at having been unable to control corruption in his governmentâs bureaucracy. Just days ago, the CBI had arrested another bureaucrat in Delhi government over corruption charges. Since his office is on the same floor as Kumar, Kejriwal raised this bogey. The CBI and the government have both denied that the raids had anything to do with Kejriwal or his office.

If there is a corruption charge against a senior bureaucrat, and the complainant himself is a former senior bureaucrat, isnât it obligatory for the CBI to investigate the matter. Ashish Joshi, former Member Secretary, Delhi Dialogue Commission has accused Kumar of favouring a firm in getting tenders. Not only the office of Rajender Kumar, but his home and several other locations were simultaneously raided. Without knowing what the charges are, Kejriwal and the AAP have already given a clean chit to the officer, claiming that he is being targeted as he works for Kejriwal.

Throwing decency to the winds, Kejriwal has called PM Modi a âcowardâ and a âpsychopathâ who has failed to fight him politically and is now resorting to such underhand tactics. Kejriwalâs language is intemperate as always and he has raised the bogey of Emergency in a reply to a tweet by TMC leader Mamata Banerjee. Opposition members shouted âfederalism bachaoâ in Parliament without trying to find out what the real story was. It seems it is becoming fashionable to beat Narendra Modi with any stick that becomes available.

This is absurd, really. If such political interference is made into the work of CBI, many corrupt officers under the state government will have undue protection. Corruption is a serious matter. Big ticket corruption has almost vanished from India ever since the NDA government assumed office. If the CBI gets complaints against an officer of Rajender Kumarâs stature, it will take every precaution necessary and would follow every procedure in the book before raiding his home and office. The agency knows that it will have egg on its face in case it goofs-up.

Kejriwal and his supporters in the opposition would be well advised to choose their words carefully and to first get the details about any matter before throwing stupid and unwarranted charges. It is shameful that a state CM can use abusive language against the PM. Kejriwal used to project himself as a suave and educated politician. But his language shows that he can shame even the most hardened loafer on the streets.