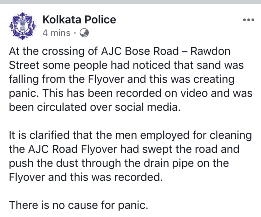 By our team of in-house writers. View all posts by this Author
The Kolkata police need to be commended for being alert to social media postings and taking timely action to nip panic in the bud. It so happened that since the morning of 4th October, people started posting a forwarded video that showed dust falling off a portion of the busy AJC Bose Road flyover in the heart of the city. Kolkatans, already in panic mode after the series of disasters starting with the caving in of the Majerhat bridge and continuing with the fires at the Bagree Market and Medical College Hospital with a bomb blast at Nagerbazar in between, started alerting people to avoid the flyover.

However, before panic could grip the city, the Kolkata police issued a clarification and circulated it widely through WhatsApp and its Facebook page apart from informing the traditional media. The note circulated by the police read At the crossing of AJC Bose Road-Rawdon Street some people had noticed that sand was falling from the Flyover and this was creating panic. This has been recorded over video and has been circulated over social media. It is clarified that the men employed for cleaning the AJC Road Flyover had swept the road and pushed the dust through the drain pipe on the Flyover and this was recorded. There is no cause for panic.

This immediately restored sanity and calmed panicky people. It is expected that police forces all over India will follow the example of Kolkata police and issue timely clarifications when panic or mischief is sought to be spread through social media.