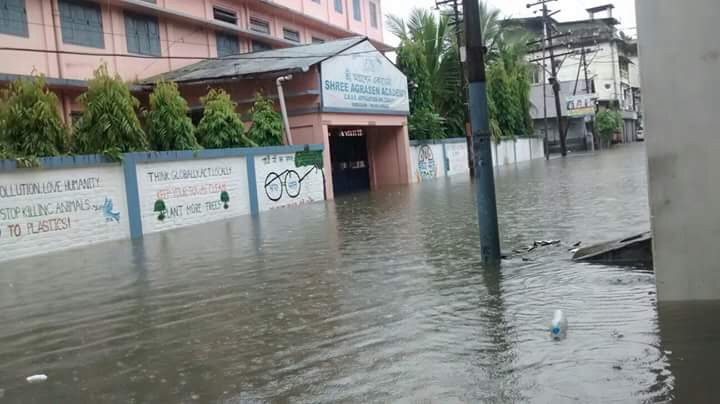 Editor-in-Chief of indiacommentary.com. Current Affairs analyst and political commentator. Writes for a number of publications. View all posts by this Author
The administration in any Indian state almost always answers questions by citizens with lathis and sometimes with bullets. Upper Assam had witnessed torrential rains a few days ago. Due to this, the level of water in the Brahmaputra river had risen, obstructing normal flow of water from towns to the river. That much every citizen understood. But of the 18 districts affected by varying degree of flooding, the situation in Dibrugarh town was grim. Although there has been little rain there in the last three days, the water has not receded. Residents complain that no effort was made to pump out water from the roads, throwing their lives and businesses out of gear.

The citizens protested at several places to force the authorities to act and they asked questions. In reply, the police beat them up with lathis at Thana Chariali, near the Dibrugarh Police Station. Instead of talking to the protestors and explaining to them why it was taking so long to rectify the situation, brute force was used to try and silence them.

The administration does not understand that in this age of instant journalism by citizen journalists, social media and the Internet, it is very difficult to gloss over their inaction or mistakes. Social media is full of pictures of water logging in Dibrugarh town with boats being pressed into service. There are pictures also of the police dispersing the protestors with their lathis. Is this the way to handle genuine grievances?

The absence of rains meant that the river level had sufficiently receded to accommodate the accumulated water on the roads of Dibrugarh town. Leaving water stagnating on the roads exposes residents to a host of diseases like malaria and flu as it will facilitate the breeding of larvae, apart from disturbing their lives. Someone has goofed up in the administration. Designated people have not done their jobs with the urgency the situation demanded. Do they have a disaster management plan in place? Is there a Plan B if Plan A does not work? The town mangers must answer these questions.

Residents of the town should continue to seek answers even if the situation becomes normal in a day or two. It is their right to seek better performance from town managers and more importantly, their duty, to keep the administration on its toes. This will ensure that the situation does not repeat itself in future.