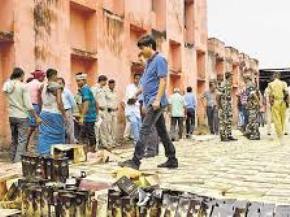 Yogendra is undecided whether he wants to be a writer. So he writes to see if he can be a writer. Ha Ha View all posts by this Author
It has been reported that in the past two and a half years since prohibition was introduced in the state, the Bihar police, along with the state excise department, has conducted raids at over 6 lakh locations and seized 16 lakh litres of foreign-made liquor and 9 lakh litres of country liquor. They also arrested 1.61 lakh persons during these raids. But only 141 persons have so far been convicted under the demonic prohibition laws.

This is really surprising. It shows that the police have not been able to prove their case in most instances. If even with the backing of stringent provisions and large seizures, the police are not able to get convictions, then there is something seriously wrong. Either there is large scale corruption which means the police weaken the case or the police are not able to link the arrested persons with the seizures. The very fact that such large seizures are being made shows that the states border is porous and bootleggers are able to get the bottles inside with impunity.

The government must look into the matter because such large seizures show that liquor is freely available in the state, making a mockery of prohibition. On the other hand, the low rate of conviction further emboldens bootleggers. Prohibition in Bihar will only be successful if corruption is weeded out and those arrested are convicted of their crime. Otherwise, the eyewash of seizures will continue, the culprits will roam free and the price of contraband liquor will continue to go up, bringing more profit to bootleggers.