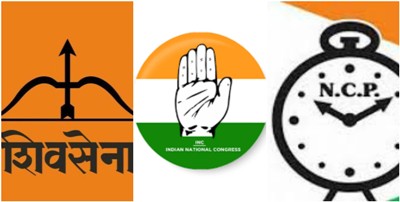 Arvind Sawant, the Shiv Sena representative in the Union government has resigned. He said there was no use remaining in Delhi when the parties were not on the same page in Maharashtra. With this, it seems the wheels have been set in motion for the final breakdown of ties between the BJP and the Shiv Sena.

This is something that should have happened long ago given the way the Sena was always critical of the Central government. But the BJP knew it did not have the people's support alone in Maharashtra. So it tried to carry the alliance partner despite its taunts and criticisms. That was a huge mistake as it emboldened the Sena into thinking that it was indispensable.

Even in the current tiff between the two, the Sena adopted such an inflexible position that it was almost impossible for the BJP to accede to its demands. Sena kept on saying that the BJP had agreed to a 50:50 power-sharing formula by which it should have first shot at the chief ministership and wanted Aditya Thackeray to be the chief minister for the first two and a half years of the new government. The BJP denied this and said that though such a proposal was put forward by the Sena, no decision was taken on it. The Sena immediately termed the BJP leaders a bunch of "liars".

If the Sena breaks off and forms the government with the support of the NCP-Congress alliance, the BJP go back to the people and explain to them how the Sena showed disrespect to their mandate by breaking the pre-poll alliance. As for the NCP-Congress alliance, one thinks the leadership of both the parties is being pressurized by the newly-elected legislators to form the government with the Sena. The NCP had already said that it might think of supporting the Sena if it broke its alliance with the BJP. As for the Congress, although Sonia Gandhi has her reservations and former state Congress chief Sanjay Nirupam has said that such an act would be disastrous, one thinks that the leadership might go with the legislators if push comes to shove.

But any Shiv Sena-NCP-Congress government will not last mainly because the Shiv Sena has a governing style and an agenda that is entirely different from that of the Congress and the NCP. The NCP will not suffer much as it is a local party with pockets of support in the sugar belt. Further, Sharad Pawar has the knack of making the best of opportunities. But in such an arrangement, the Congress will be the biggest loser. It has been asking for votes in the name of secularism and to stop the march of Hindutva parties. If it aligns with the Sena, the minorities will go against it. The Congress should weigh all options before jumping in.