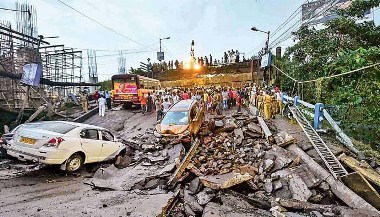 Majerhat Bridge Will Be Built Afresh

Majerhat Bridge Will Be Built Afresh

Holding an extreme view and carting the ball out of the park is what interests him most. He is a hard hitter at all times. Fasten your seatbelts and read. View all posts by this Author
It is good that the probe committee headed by West Bengal chief secretary, Malay Dey, inquiring into the reasons for the collapse of the Majerhat Bridge, has pinned major part of the blame on the state PWD. It is rare that politicians allow their officers to blame state agencies. Often these reports try to skirt the issues or try to pin the blame on Central agencies. This was expected from this committee as well after chief minister Mamata Banerjee had initially thundered against the piling work that was done by the Metro railway, alluding that it was the major reason for the collapse. But the report shows that for the first time, the TMC government has acknowledged the shortcomings of its own department in a major way.

Another good thing about the report is that it has recommended taking down the entire bridge and reconstructing it from scratch instead of just building the collapsed portion. This is in line with what a private agency had said after examining the bridge some time back. The government hopes to complete the work in one year. Even if it is done in one and half years it will not be a problem, especially as the government is building two new roads nearby that are expected to make life easy for commuters. Majerhat Bridge is a dilapidated structure and propping it up in stop-gap fashion would be dangerous. Hence, the government must be congratulated for taking the decision to rebuild it from scratch.