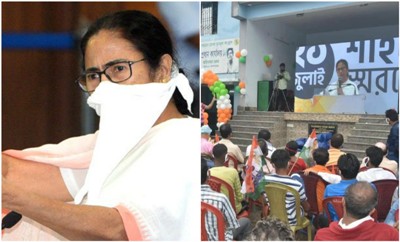 Mamata Banerjee Goes Into Campaign Mode, Tears Into The BJP

Mamata Banerjee Goes Into Campaign Mode, Tears Into The BJP

As the 2021 state elections approach, the Trinamul Congress in West Bengal has revamped the state unit. This was necessary as the local level leadership in several districts had embarrassed the party by indulging in successive scams - first the food scam in the distribution of ration during the lockdown and then the Cyclone Amphan relief fund scam. Party chief and Chief Minister Mamata Banerjee had taken strict action against those found guilty in the latter scam but it was clear that the rot was too deep and a shakeup in the party was necessary. The TMC did away with the post of poll observers and formed a seven-member steering committee for the 2021 assembly polls and a 21-member coordination committee. These changes have been made after inputs from Prashant Kishore. The political strategist has conducted a year-long survey before suggesting the changes.

Banerjee has also put herself in the campaign mode. After having made mincemeat of the Congress and the Left in successive elections, she has now trained her guns on the BJP as the party made substantial gains in the 2019 Lok Sabha elections and has emerged as a dangerous opponent. But unfortunately, when she addressed party workers virtually a couple of days ago, she tried to steer the narrative towards sub-nationalism by saying that "Bengal will be run by Bengalis". That is dangerous territory and Banerjee should know that. Firstly, it shows that she thinks that those who run the BJP in the state are not Bengalis, or even if they are, they will be just puppets and the real power will be in the hands of those in Delhi. Secondly, she is trying to do in Bengal what the BJP is trying to do all over India. While the BJP has been trying to promote its own brand of nationalism, Banerjee will now promote her own brand of sub-nationalism. Both are equally wrong.

Mamata Banerjee has many other sticks to beat the BJP with, without playing the Bengali versus non-Bengali card. As she rightly said, the BJP is trying to build an India of "one nation, one political party" by toppling elected governments in many states. She should build on that. Then, she should capitalize on the fears in the minds of the electorate over the NRC and the CAA. She was doing it successfully before the pandemic struck and she should not change the narrative now. She can still defeat the BJP in the state if she manages to keep her party, particularly the corrupt local-level leaders, in check and convinces the electorate that voting for the BJP will make them aliens in their own country. She will also need to shore up her governance record which has lost much of the sheen acquired in the first term. Anti-incumbency and a rampaging BJP must bring the fighter out in her but she must take care not to fall into the BJP's trap by doing at the state level what the BJP is doing all over India.