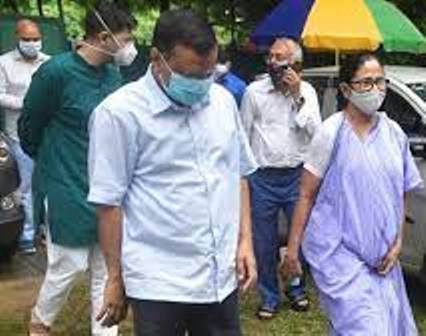 West Bengal chief minister Mamata Banerjee, on her maiden visit to Delhi after her thumping victory in the state polls, is making all the right moves, using the opportunity to impress the nation as the one leader who knows how to stop the BJP juggernaut and speaking to many opposition leaders in a bid to unite then under a common umbrella. More importantly, she is keeping her impulsiveness under check and is not getting provoked by the media.

Under normal circumstances, Mamata would have been the natural choice to lead the opposition alliance as she was the one who took the full might of the BJP head on and prevented it from capturing West Bengal. Further, her record is impeccable - the social schemes introduced by her government have regularly won national and international awards. In her third term, she has been quick to introduce schemes like grants to farmers, the Student Credit Card and the Lakshmir Bhandar (basic monthly income scheme for woman head of family) that were promised to the people. She has also been very vocal in criticizing the Centre over a host of issues like Covid management, procurement of vaccines etc. In fact, she has already instituted an inquiry commission to probe the Pegasus snooping charges. Her credentials to lead the opposition front are impeccable and undeniable.

But in a diplomatic answer, when asked who will lead the alliance, Mamata said that she was not an astrologer to predict that. She has also made it clear in Delhi that unity is what matters and the question of leadership can be settled when the time comes. In fact, she said that the people of the country will not forgive the opposition parties if they do not unite and stop the BJP that was destroying the nation. It remains to be seen how the opposition responds to her initiative as there are too many contradictions that need to be set right. But one thing is sure - Mamata Banerjee has done her duty in her customary proactive and bold manner.