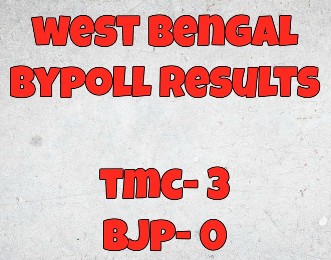 The Trinamool Congress won all the three seats for which bypolls were held recently in West Bengal. It snatched the Kharagpur Sadar seat from the BJP, the Karimpur seat from the Congress and retained the Kaliaganj seat.  In Kaliaganj, Tapan Deb Sinha of the TMC beat his nearest BJP rival by 2418 votes. In Kharagpur Sadar, the TMC candidate won by a margin of 20811 votes, landing a huge punch on the face to the BJP. The state BJP president Dilip Ghosh was the MLA from this seat before he got elected to the Lok Sabha. In Karimpur, the margin was over 23000 votes.

This was an excellent performance by the party which managed to push back the BJP and reduced the Congress-CPIM alliance to the margins if they were not already there. The victory in Kharagpur Sadar was especially creditable as TMC was third here the last time. Its candidate had secured just 34000 votes in 2016, falling behind both the BJP and the Congress. But this time, the TMC candidate, Pradeep Sarkar, got 72893 votes, a turnaround not normally witnessed in bypolls unless there is a major wave. After the victory, chief minister and party supremo Mamata Banerjee said that it was the victory of the people and her party's policies of development. She also said that the people of West Bengal had paid back the BJP for its arrogance. Yet, the TMC and Banerjee cannot deny that the BJP is fast occupying the opposition space left vacant by the complete annihilation of both the Congress and the Left parties.

In all three seats, the BJP nominees were second after the TMC. The number of votes polled by the BJP was nearly 80 percent of that polled by the TMC. This shows that the party has managed to gain acceptance in a state that was hitherto unchartered territory for it. Its performance might have been better had it not been for the fear the people of West Bengal have for the NRC, especially after the Assam fiasco. Amit Shah did not help the matter by asserting just before the bypolls that the NRC would be implemented on a pan-India basis. The TMC was quick to condemn that and reiterate that it would never be allowed in West Bengal.