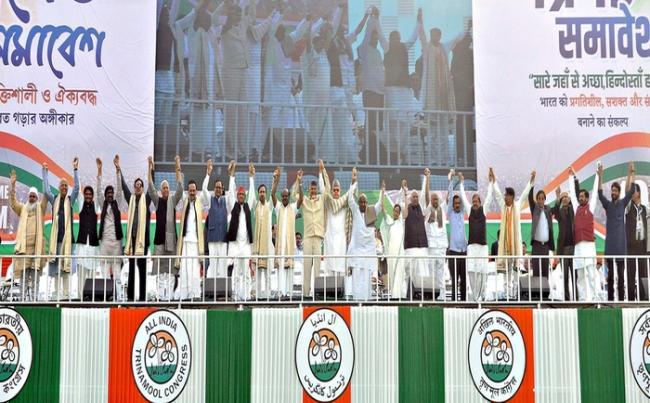 Editor-in-Chief of indiacommentary.com. Current Affairs analyst and political commentator. Writes for a number of publications. View all posts by this Author
The Kolkata rally by the opposition parties, organized and steered by TMC chief Mamata Banerjee, was a huge success in terms of attendance  both by opposition leaders and the crowd. Almost the entire opposition leadership  barring the Left parties, KCR from Telangana, Naveen Pattanaik from Odisha, the Thackerays from Shiv Sena (although not technically the opposition, no love is lost between them and Modi) and Jagan Reddy from Andhra  was present and it included the high profile BJP rebels like Shatrughan Sinha and Arun Shourie, along with Yashwant Sinha who has left the party. The Congress bigwigs, Rahul and Sonia, gave the event a miss and sent Mallikarjun Kharge instead. Also not present was BSP boss Mayawati, who also chose to send a representative. The crowd was huge as TMC has created a virtual political monopoly in the state by annihilating the Left and the Congress and not allowing the BJP to take roots in the state.

The sound bites were also perfect. Speaker after speaker bashed Narendra Modi and his ideology. They spared nothing  from his dictatorial style of functioning to his divisive politics, from his intolerance to criticism to his destroying of institutions and his bad policies that were ruining the economy. They were all united in saying that Modi needs to be removed and agreed that it could be done only by a united opposition. They also effusively praised Didi  as Mamata is universally known  for taking the lead in uniting the opposition. They also underplayed the question of leadership, choosing to say that the matter will be decided once Modi is defeated.

But no one said anything about Mamata Banerjee leading the opposition in the 2019 elections, something that would have been music to Didis ears. It needs to be remembered that MK Stalin was present on the stage. Stalin had proposed Rahul Gandhis name as prime minister in the event of an opposition victory in 2019 in a recent rally in Chennai. Hence, despite the success of the rally, the questions that were there before it was held still remain. Namely, who will be prime minister in they win and how will this talk of unity translate into seat sharing on the ground. Already, the SP-BSP have struck an alliance that excludes the Congress in UP. That Congress is miffed at this and the talks of Mamata leading the opposition instead of Rahul is evident from the fact that Rahul chose to give the event a miss, knowing full well that it afforded a great opportunity to slam Modi. Hence, despite the relatively successful rally, there is a lot that remains to be done for a united opposition to take on the BJP juggernaut in the upcoming elections.