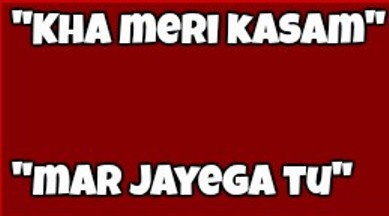 By our team of in-house writers. View all posts by this Author
Gone are the days when pliant heroines used to croon sher se main kahun tumko chor de, mujhe kha jaye. Now, when the hero asks for any kind of reaffirmation, the heroine is likely to give him thumbs down. People say that equality in relationships is there for all to see and cinema reflects this.

People are talking about the quirky exchange of dialogues shown in the trailer of the upcoming movie Gully Boy where Ranveer Singh scolds Alia Bhat for having thrashed a girl who made advances at him. He asks her whether she has become a ruffian to do things like this. Alia first says she would do it to anyone who gets cozy with her man, but later says that it will not be repeated and she would behave herself. When Ranveer asks for reaffirmation by asking her  kha meri kasam, Alia retorts with mar jayega tu.

People feel that in that one line, the character played by Alia puts everything the present generation feels about right and wrong, convictions and promises. People say that the youth today carries strong convictions. They make up their minds about what is wrong and what is right and then follow it up with conviction. They also do not make false promises and are more likely to give an outright response, like Alia, if someone insists on a promise.

People are saying that movies today are increasingly capturing the changing mores in society and project the feelings of the younger generation in a better way. People also say that the language being used is also much closer to how people normally talk. People are talking about how young directors like Zoya Akhtar make films that are meaningful and realistic and yet commercially successful. People say this is possible only because these directors have their ears firmly glued to the ground.