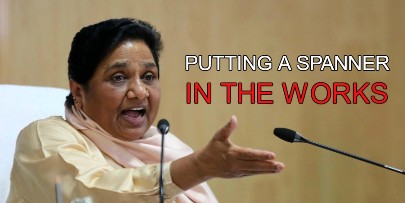 Editor-in-Chief of indiacommentary.com. Current Affairs analyst and political commentator. Writes for a number of publications. View all posts by this Author
Mayawati has started flexing her muscles. It is detrimental for opposition unity. But bhenji is not concerned about that now. She has suffered a lot of humiliation since 2014 and is in no mood to give in to lopsided seat-sharing deals, especially when she knows that the backward classes are back with her and will no longer be swayed by the growth promises of the BJP like they were in 2014. Hence, she has snubbed the Congress and tied up with Ajit Jogi in Chhattisgarh. Her party will get 35 seats while Jogis party will fight on 55 seats. Mayawati has declared that Jogi will be chief minister if the alliance wins.

This comes concurrently with her declaration of 22 candidates for Madhya Pradesh, another state where she is in talks with the Congress over sharing seats. Initially, she wanted 50 seats for her party. But Congress continued to dither. So Mayawati went ahead and announced the 22 candidates. Most of the seats for which the candidates have been selected fall in the area considered to be the fiefdom of Jyotiraditya Scindia, putting Congress in a fix. It seems the Madhya Pradesh efforts on seat sharing will also fall through.

The same goes for Rajasthan. Given the states propensity to change governments every five years, the Congress is sure of winning here. Rajasthan is mostly a two horse race with the party in direct fight with the BJP. Hence it is in no mood to concede space to the BSP. But Mayawatis party does have a presence in the state. It won 3 seats in 2013, with 3.4% of the popular vote. Although this was 4.2% less than what the party got in 2009, this time around the party is hoping to make a better showing due to atrocities on Dalits by the Hindutva elements. Hence, Mayawati wants a good number of seats which the Congress is not willing to concede.

All this is bad news for opposition unity in the run-up to the general elections in 2019 but good news for the BJP. Even a small division in opposition votes is likely to benefit the ruling party as in keenly contested elections, 3 or 4 percent of votes make a huge impact. If the opposition is serious about presenting a united face in 2019, it must appoint a National Coordinator - perhaps Mamata Banerjee can take up the role - to smoothen out seat-sharing formulas between different parties and the Congress in the states. This will prevent tiffs and acrimony and will lead to a smoother understanding in 2019. But will the Congress, riven by internal conflicts, allow Banerjee, or any other senior opposition leader, to play this role?