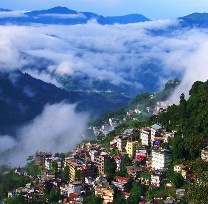 Editor-in-Chief of indiacommentary.com. Current Affairs analyst and political commentator. Writes for a number of publications. View all posts by this Author
Meghalaya, which has thrown up a hung assembly, will now become the latest hotspot for the politics of jod-tod. Political hustlers from both the BJP and the Congress have descended upon Shillong and the state capital will witness parleys where much more than politics will be discussed. After the recent debacles in such jod-tod in Goa and Manipur, the Congress is wary of conceding ground to the BJP and has sent bigwigs to Shillong to help Mukul Sangma in cobbling together an alliance to save their face in the north-east.

The situation in Meghalaya is peculiar. The Congress has got 21 seats (the majority mark is 31), while the NPP has got 19. The BJP has got just 2 seats but the NPP is an alliance partner in the North-East Democratic Alliance (NEDA) and they can form the government together. 17 from small local parties and independents have won. Although this is not surprising in this state as independents have usually won in high numbers (they won 13 seats in 2013), usually the Congress managed to win good enough seats to form the government. But with the party falling far too short this time, the key to the formation of the next government is in the hands of these local parties and independents.

Obviously, they will up the ante and make the national parties cough up enormous amounts for their support. They know that both the Congress and the BJP have much at stake. For the Congress, it is important to hang on to Meghalaya otherwise it will have no footprint in the north-east. Also, the Congress will be hard pressed to explain how it lost in states which have small Hindu population as its major plank against the BJP is that it is a Hindu party that polarizes voters according to religion for electoral gains. For the BJP gaining Meghalaya will complete its sweep of the region. Hence, the local parties and the independents are less likely to blink first in the negotiations. It is certain that whichever party fails to win their support will accuse the other of employing money power.

The people of Meghalaya will wait with fingers crossed and will hope to have a stable government in place in the next few days. The state needs a progressive government which can bring rapid development. Although largely hilly, the state has potential for industrial development in the region bordering Assam. The next government must put in place a favourable industrial policy to attract investment. There is no reason why Meghalaya cannot attract industrial investment when Assam can. Then there is tourism. Meghalaya is one of the most picturesque states in India. Sustained effort is needed from the state government to create tourism infrastructure to make it the favoured destination of both Indian and foreign tourists.