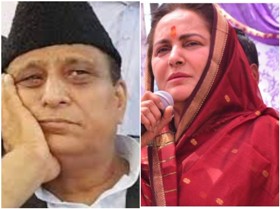 Editor-in-Chief of indiacommentary.com. Current Affairs analyst and political commentator. Writes for a number of publications. View all posts by this Author
Despite a change of guard at the top, the Samajwadi party remains chained to patriarchy and misogyny. Despite Akhilesh Yadavs wife Dimple Yadav becoming a prominent face of the party who is present at all party events and discussions, party leaders do not think women have any place on the high table. One has to view Azam Khans reprehensible attack on Jayaprada against this background.

Azam Khan is a habitual offender. He had earlier called Jayaprada a nachne, gaane wali. But this time, he crossed all limits of decency when he said that she worekhakhi underwear referring to her alleged links with the RSS. Main 17 din mein pehchan gaya ki inke niche ka underwear khakhi rang ka hai is what he exactly said. Now he claims that he had not referred to Jaya but for turncoats who have RSS links in general and if it is proved that he targeted Jaya, he would leave politics.

Who is Khan trying to fool? Ever since it was announced that Jayaprada would be the BJP candidate against him from Rampur, all his utterances against her have been misogynistic. Khan, it seems, cannot digest the fact that he has to lock horns with a woman who might defeat him. It hurts his manliness to fight a lady, who is no lady according to him.

The Samajwadi party has never given much importance to the rightful place of women in society. People will remember how Mulayam Singh Yadav had once said that boys will be boys while referring to the Shakti Mills rape case in Mumbai, meaning that if boys rape girls because of the urge, they should not be hanged for it. Azam Khans thinking is cast from the same mould. Such people think women are of no importance in places where men hold the fort and that is everywhere except the kitchen and giving birth to children.

One had thought that Akhilesh Yadav would have reprimanded Khan and put him on a leash. But he has also tried to downplay the issue by saying that Khan was talking about the RSS. Everyone knows khakhi underwear refers to the RSS. But everyone also knows that Khan was trying to denigrate Jayaprada. If the Yadav scion does not admit it, he is doing a great disservice to the society in general and womanhood in particular. It is extremely unfortunate and disturbing that despite being young, he is inflexible and is keeping his party rooted to its patriarchal ideology.

Yadav has to realize that with women making up nearly 50 percent of the population and with more and more of them getting educated and leaving homes to study, work or be entrepreneurs, they will rightfully have an increasingly bigger say in society and by extension, in politics. Gone are the days when they could be silenced with a hard stare from the head of the family. With the womans viewpoint now gaining increasing currency and with all political parties committed to reserve 33% (which must just be seen as a beginning for ideally they should have 50% seats reserved for them. If we cannot correct the sex ratio that we have skewed by killing the girl child in the womb, we can at least correct the representation ratio to give them their rightful place in the society and the decision-making process) of the legislative seats for them, the world is not going to be run by men alone. The earlier the SP and other equally misogynistic parties change themselves, the better for them. Otherwise, women power will make them irrelevant in the coming years.