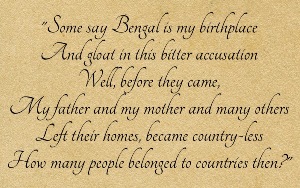 The case registered against 10 poets for writing poems -traditionally known as Miya poems in Assam -describing the pitiable condition of Bengali Muslims who despite residing in the state for ages, are being hounded for being âforeignersâ ( during the NRC process ) is not correct. Miya poems have traditionally been the voice of angst. They describe the hardships being faced by the people. Often, they sound anti-establishment for the reason that most of the sufferings of the people are due to administrative negligence and social apathy. Hence, if the current poems are against the NRC it is only because the issue is affecting their lives now, threatening their very existence. Almost all of the literary expression is a reflection of what the poets see around them. If at present the poets see the troubles being faced by the people as a result of the NRC, the fear in their minds of being declared foreigners and sent to detention camps and their drooped shoulders, they are going to write about that. As long as the poet is not a habitual pamphleteer who arouses people against the state, his writing is to be viewed through a broad prism and should not be censored or penalized.

The poems are in no way a call to arms or an uprising against the state. They state the misery of the people and the darkness before them. That is the truth. Every nation has the right to identify, detain and deport infiltrators. The NRC seeks to identify infiltrators who slipped into India before, during and after the liberation war in Bangladesh on the plea of fleeing from an oppressive regime and then stayed on. India has the right to identify them and declare them aliens. No nation can allow its limited resources to be shared by infiltrators who also change the demography of the region and do not fit in with the local population. Human rights issues come much later but the plain fact is that these infiltrators were allowed to stay and residency documents were made for them by successive regimes in the past only to develop them as a vote bank. Having said this, these alleged infiltrators also have the right to express anguish at their situation. There is no sedition involved in this. The government must allow literary expression and release the poets.