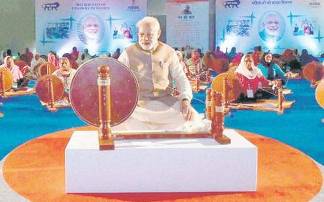 Modi on Charkha on KVIC Calendars

Modi on Charkha on KVIC Calendars

By our team of in-house writers. View all posts by this Author
People are talking about the new diaries and calendars of Khadi and Village Industries Commission (KVIC) that feature Prime Minister Narendra Modi on the charkha in the pose made iconic by Mahatma Gandhi. The Mahatma has been the mascot of everything related to khadi. People connect khadi with him as it was he who promoted swadeshi to give a jolt to the Manchester based textile mills. His is the picture that adorns most khadi outlets and the diaries and calendars that the KVIC sends out to patrons prominently feature Gandhi.

This year, however, has seen Modi usurp that. People are saying that this urge to be there on the cover of everything that every government department sends out to the public does not befit the prime minister. People agree that everyone who has been to the Sabarmati Ashram near Ahmedabad must have tried his hand at spinning the charkha. They also acknowledge that the internet is full of pictures of many politicians, including loudmouth Arvind Kejriwal, replicating Gandhis pose. But they are saying that it is improper for KVIC to replace the Mahatmas picture with that of the prime minister.

At the same time, people are also saying that such matters are obviously not decided by the prime minister himself or even by people close to him. KVIC chairman Vinai Kumar Saxena is reported to have said that deviations have occurred in the past too. But people are not convinced. People say that such sycophancy must be avoided. People suggest that there should be a rule in place that if the prime ministers or any other ministers picture is to be used in calendars or diaries of any government ministry or department, it should get a nod from the PMO or a wing specially created for the purpose.

As the employees of KVIC go on a silent protest against the brazen sycophantic move, people demand that the government must disclose who took the decision to put Modis picture on the diaries and the calendars. They are also demanding that if that person exceeded his brief, he or she should be handed an exemplary punishment to deter others from indulging in such flights of fancy.